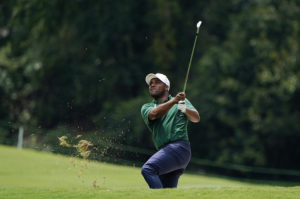 Harold Varner III hits from a bunker on the 10th hole during the second round of the Wyndham Championship golf tournament at Sedgefield Country Club on Friday, Aug. 14, 2020, in Greensboro, N.C. (AP Photo/Chris Carlson)

GREENSBORO, N.C. — He didn’t shoot nearly as low as Thursday, but after two rounds of the Wyndham Championship Harold Varner III is very much in contention. Varner entered the round tied for the lead after shooting 8-under on Thursday. Friday was a more challenging day, but the Gastonia native battled, shooting 1-under 69.

Entering the weekend Varner is tied for 5th at 9-under . Four are tied at the top one shot ahead of Varner at 10-under.