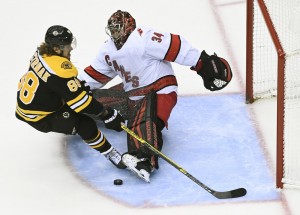 TORONTO (AP) — Patrice Bergeron broke a tie with 3.5 seconds left in the second period, David Pastrnak returned with two assists and the Boston Bruins beat the Carolina Hurricanes 2-1 on Wednesday to win the first-round playoff series in five games.

The Bruins trailed 1-0 entering the final 5 minutes of the second period before scoring twice on the power play, first from David Krejci with 4:40 left after Bergeron drew a penalty on a breakaway chance.

Then came Bergeron’s score as the teams appeared headed to the second intermission tied at 1. He tracked down a loose rebound from Pastrnak that hit the boards, then quickly sent the puck back toward the net from the left side.

The puck slipped under a standing Petr Mrazek, bounced off his left skate and straight into the net for the 2-1 lead.

Bergeron and Krejci also had an assist each for the Bruins, while Pastrnak’s return to the lineup also provided a boost. The NHL’s co-leader with 48 regular-season goals hadn’t played since the fourth-seeded Bruins won Game 1 in double overtime and was a gametime decision for this one.

The fifth-seeded Hurricanes were trying to regroup from the Bruins’ dominating third-period performance to rally from 2-0 down and win Game 4 on Monday night. They responded by taking a first-period lead on Haydn Fleury’s goal, but they didn’t score again as the Bruins gradually climbed past them.

Mrazek had 25 saves for the Hurricanes, including a pair of stops on 1-on-1 chances for Pastrnak before the Bruins finally broke through on the way to eliminating Carolina for a second straight season.

The Bruins entered the postseason as the Presidents’ Trophy winner with a league-best 100 regular-season points, only to go 0-3 in the round-robin series to determine the top four seeds in the Eastern Conference playoffs. But Boston has now won three straight since losing Game 2.

NOTES: Jaroslav Halak had 23 saves for Boston, which swept Carolina in the Eastern Conference finals last season. … Carolina played without 20-year-old winger Andrei Svechnikov for the second straight game. He went down late in Game 3 after his leg twisted awkwardly beneath him late in the third period after tussling with Zdeno Chara for position. … Carolina captain Jordan Staal played after being knocked from Game 4 on a jarring third-period hit from Charlie McAvoy. … The Hurricanes were without D Joel Edmundson for the fourth straight game.