CHARLOTTE, NC (News Release) — Grifols, a global healthcare company and recognized leader in the development and production of plasma-derived medicines has officially launched its multi-channel, nationwide plasma donor recruitment campaign to raise awareness about the importance of plasma donation. Grifols has a network of more than 250 centers operating under the names of Biomat USA Inc., Interstate Blood Bank Inc., and Talecris Plasma Resources, Inc.

Grifols is launching this campaign to recruit more plasma donors into its network of plasma donor centers. The campaign will educate on the important role of plasma in producing life-saving medicines and motivating individuals to be part of something bigger – the Grifols family.

Plasma is needed today, more than ever, to meet the growing demand for life-saving plasma-derived medicines. Grifols will launch a highly targeted, multi-channel campaign to raise awareness of plasma donation and attract new donors into its centers. 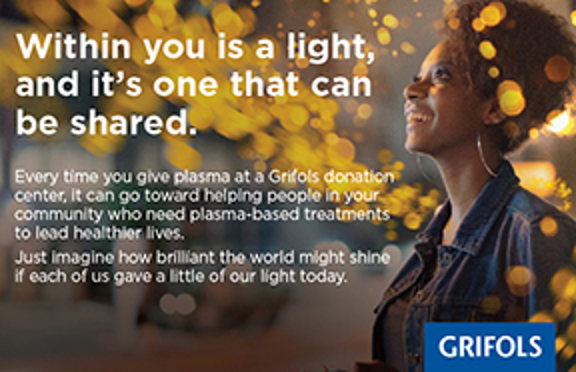 The “Give Your Light” campaign is being featured across multiple channels including radio, broadcast and streaming TV, social media, printed materials, and paid digital advertising. Additionally, Grifols is proud to partner with the 2020 virtual “iHeartRadio Music Festival,” widely acknowledged as the most social music event in the world.

Plasma contains essential proteins and antibodies that help our bodies properly function. Without enough of any one of these proteins, a person could have or develop a life-threatening illness. Every time a person gives plasma at a Grifols donor center, it goes toward helping people globally who have no other alternative than plasma-derived medicines to lead healthier lives.

Plasma is also playing a role in the fight against COVID-19. Grifols is acting with urgency during this global crisis by collecting plasma from those who have recovered from COVID-19 to produce an anti-SARS-CoV-2 hyperimmune globulin that will soon undergo controlled clinical trials with the National Institutes of Health (NIH) to evaluate its safety and efficacy as a viable treatment for COVID-19.