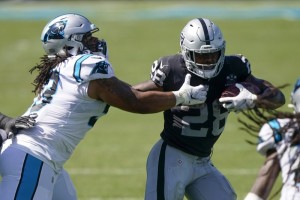 CHARLOTTE, N.C. — Carolina coach Matt Rhule knows if the Panthers are to win their first game Sunday, they will have pressure “iconic quarterback” Tom Brady and not allow him to sit in the pocket and pick their defense apart.

The Panthers didn’t register a sack in their season opener against the Las Vegas Raiders and barely got any pressure on Derek Carr.

“We have to come up in crucial situations and get pressure,” Rhule said. “The biggest thing I took away from last week is we have guys who are more than capable but we have to be a little bit more tenacious, we have to hit pass rush moves and use our hands better. There are things we can correct.

“We have to get a four-man rush,” Rhule added. “That is easier said than done.”

That task will be even more difficult if Panthers defensive tackle Kawann Short is unable to play.

The two-time Pro Bowler and the veteran leader of a young defensive line sat out practice Wednesday with a foot injury. The best way to pressure Brady in the past has been to get an inside push, and without Short the Panthers could have a difficult time doing that.

Short is by far Carolina’s most experienced defensive lineman.

Of course, a pass rush and coverage go hand-in-hand, and it doesn’t help that the Panthers are also young — and a little banged up — in the secondary, too.

Rookie Troy Pride Jr. is starting at cornerback with Eli Apple out with a hamstring injury, while top cover man Donte Jackson left Sunday’s game against Las Vegas in the first quarter, forcing the Panthers to play Rasul Douglas, who was claimed off waivers last week. Douglas played well, but Pride struggled at times.

Jackson returned to practice on Wednesday, which is good news for a unit that will face a talented group of Buccaneers receivers led by Mike Evans. Tampa Bay’s other wide receiver, Chris Godwin, is in the concussion protocol.

The Raiders scored on six of their first eight possessions on Sunday, with 20 of Carr’s 23 completions coming on throws of less than 10 yards. He put the ball in the hands of his playmakers and let them make plays.

Brady, who was 23 of 39 for 239 yards with two touchdowns and two interceptions in his Bucs debut last week, will surely look to exploit Carolina’s weaknesses.

“I thought our tackling at times, a lot of reaching, a lot of grabbing and we could take just a couple more steps and make those tackles and make them even better,” Rhule said. “I hope and expect that we will make some radical jumps on defense as we tackle better. ”

Particularly on third down, Rhule said. The Raiders converted 6 of 11 third downs against Carolina.

“There were so many third and shorts and I think that just goes back to their ability to run the football and then at the same time get the ball on the perimeters, and screens. There wasn’t a lot of drop-back passes,” Rhule said. “There were some play actions that hurt us on specific plays but there wasn’t a lot of drop-back passes. There was a lot more run the ball and get the ball to the perimeter.”

NOTES: The Panthers will be without starting guard Dennis Daley for the second straight week due to a foot injury. … Christian McCaffrey wore a green jersey on Wednesday, designated for players who aren’t to be touched in practice. The team wants to limit unnecessary wear and tear on the All-Pro running back.