A source from the Charlotte-Mecklenburg Schools sent WCCB Charlotte’s Alexandra Elich a memo that was sent from the district to the staff regarding confusion over the CMS computer camera policy.

The memo was sent to remind teachers that it is not mandatory for students to have their computer cameras turned on during remote learning. 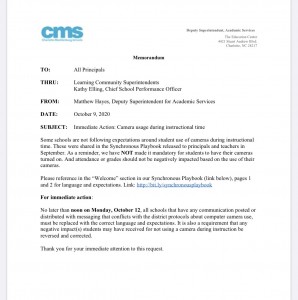 Elich pressed the district last week after some schools were giving opposite instructions. Resulting in students being marked absent if their cameras weren’t tuned on.

I pressed the district last week after some schools were giving opposite instructions. Resulting in students being marked absent if their cameras weren’t tuned on. @WCCBCharlotte https://t.co/p0uWGGPY0m

CHARLOTTE, NC. — Since August, going to school has a new meaning for students in CMS. Mostly, sitting in front of a computer at home. Carolyn McGrath is a working mother with a six-year-old and eight-year-old in the district. She says remote learning has been a challenge.

“It’s something that requires constant monitoring, daily from the parents to make sure that they’re getting on and completing their lessons,” says McGrath.

Wednesday, McGrath says her son was having technical difficulties logging on to remote class at first, including his computer camera. She says  he was able to participate in most of the class.

“I received an email from school that he was marked absent for the day.”

CMS teacher Justin Parmenter says the deputy superintendent communicated to all staff members on September 28th, to not make it mandatory for students to have their cameras turned on. He says some schools in the district are having opposite policies. South Mecklenburg High School’s remote learning policy: says “Students must have cameras turned on”

“Anytime we have students who are marked absent when they’re present or students who are kicked out of a class because they don’t want to turn their camera on. That’s a real problem,” says Parmenter.

He says there needs to be more communication and awareness.

“What’s clear is that there’s a policy that hasn’t made its way down to the classroom level yet and there seems to be some kids who are paying the price for that lack of communication.”