Charlotte, N.C. – A trio of Charlotte 49ers standouts will be in starting lineups as the NFL Playoffs begin with Wild Card Weekend, Saturday and Sunday.

One game, Cleveland at Pittsburgh (Sun., Jan. 10 at 8:15 p.m., NBC), will feature former 49ers defensive standouts Larry Ogunjobi and Alex Highsmith on opposite sidelines while Nate Davis will be on the offensive line as his Tennessee Titans host Baltimore (Sun., Jan. 10 at 1:05 p.m., ESPN/ABC).

The two, who are among the most decorated 49ers in the program’s short history, rank 1-2 all-time for the 49ers in sacks and tackles for loss (TFL). In 2019, Highsmith was named second-team all-America by Sports Illustrated and third-team all-America by AP and Pro Football Focus. He was a first team all-Conference USA choice in 2018 and 2019.  Ogunjobi earned first team all-C-USA honors in 2016, the first 49er to do so, and started all 46 games in his four-year career. Highsmith holds the 49ers career sacks record with 21.0 while Ogunjobi posted 13.0. Ogunjobi owns the career record with 49.0 TFL while Highsmith recorded 46.0. 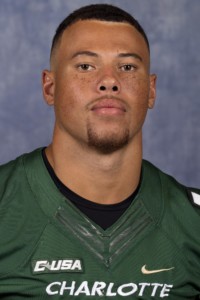 Davis was a four-year starter for the 49ers that opened holes for the likes of all-time leading rushers Kalif Phillips and Benny LeMay. Sunday, he will continue to work on behalf of the Titans’ 2,000-yard rusher Derrick Henry. Davis was named second team all-C-USA in 2018 and earned honorable mention in 2016 and 2017.

Highsmith has started each of the last five games for the Steelers and played in all 16 in his first year. He has 48 tackles, this year, with 5 TFL and 2.0 sacks. In the last two games, he has recorded 17 tackles for the Steelers.