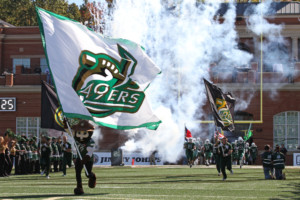 The Charlotte 49ers take on the James Madison Dukes at Jerry Richardson Stadium.

Charlotte, N.C. –  Several Charlotte 49ers football players have been selected to participate in upcoming senior showcase events. Safety Ben DeLuca and defensive end Romeo McKnight were named to the East-West Shrine Bowl, which was scheduled for Jan. 23. That in-person event has been cancelled due to the pandemic and replaced with virtual activities. Running back Tre Harbison III will be playing in this weekend’s SPIRAL Tropical Bowl while running back Aaron McAllister and center Jaelin Fisher will take part in the 2021 College Gridiron Showcase & Symposium, January 17-21.

DELUCA; MCKNIGHT SELECTED FOR SHRINE BOWL
S Ben DeLuca and DE Romeo McKnight were selected for the 2021 East-West Shrine Bowl. That game was cancelled due to challenges presented by COVID-19 but players are able to participate in various virtual training/informational drills with current NFL coaches and members of the NFL Operations staff in preparation for the NFL Draft.

DeLuca became the 49ers all-time leading tackler this season. A four-year starter and two-time team captain, DeLuca also owns school records for forced fumbles and fumbles recovered and shares the school mark for career pass break-ups. He was second on the team with 48 tackles, including a season-high 16 at Appalachian State. He forced two fumbles with an interception and finished his career with 313 tackles, four interceptions, nine forced fumbles and six fumbles recovered. He was named a Freshman all-America in 2016 and earned all-C-USA honorable mention in 2017, 2018 and 2020. He played in 43 games, making 38 starts.
McKnight spent one season with the 49ers after transferring from Illinois State. He started five of six games played and led the 49ers with 5.0 tackles for loss and three QB hurries. He was second on the team with 1.5 sacks and had 24 tackles.

TROPICAL BOWL, JAN. 17
Harbison III will be in Orlando, Fla. for this weekend’s SPIRAL Tropical Bowl. The game is slated for Sunday at 11 a.m.
The SPIRAL Tropical Bowl is a premier FBS Division I level College Football All Star Game that showcases the top college football seniors to NFL scouts and GM’s. The weekend is focused on scouting, teaching, and football. Thirty NFL and CFL teams are expected to attend. Harbison will be on the American Team (White) coached by Chris Miller.

A graduate transfer from Northern Illinois, Harbison was the 49ers leading rusher in 2020. He rushed for 337 yards on 80 carries in the 49ers six games (56.2 yds.gm). He topped the 49ers with four rushing touchdowns. He led the 49ers with 87 rushing yards and a TD at Appalachian State, 57 yards and a TD at Duke and 80 yards in the season-finale vs. WKU.
He spent one season with the 49ers and started five of six games. Harbison had back-to-back 1,000-yd rushing seasons at Northern Illinois before joining the 49ers.

COLLEGE GRIDIRON SHOWCASE & SYMPOSIUM, JAN. 17-21
McAllister and Fisher will be in Ft. Worth, Texas for the College Gridiron Showcase & Symposium, Jan. 17-21. The 2021 event will include individual and non-timed, non-contact combine style drills. Players will attend meetings, and, in many cases have the opportunity for personal interviews with scouts and executives. CGS also provides participants with a strong professional football education component that includes mentoring, life coaching, and seminars related to financial education, the life of a professional athlete, and on- and off-field player expectations.

McAllister earned honorable mention all-Conference USA honors from the league’s coaches and was named third team all-C-USA by Phil Steele in 2020 after leading the 49ers with a 100.2 all-purpose average. The redshirt senior averaged 50.8 rushing yards and added 90 receiving yards and 157 return yards in his five games played. McAllister led Charlotte with five touchdowns scored and became the first 49er to score a rushing, receiving and return TD in the same season. He had the 49ers longest rush (66 yards), longest catch (71 yards) and a school-record 97-yard kickoff return during the season. He concluded his career ranked third all-time with 1,487 rushing yards and had 16 touchdowns and three 100-yard rushing performances.
Fisher was named honorable mention all-Conference USA by the league’s coaches and third team all-C-USA by Phil Steele. A three year starter, Fisher was on the Rimington Watch List for the nation’s top centers and the Outland Trophy Watch List for the nation’s top interior linemen. One of the 49ers four co-captains, Fisher made 30 starts in his 49ers career and started all five games he played in 2020.