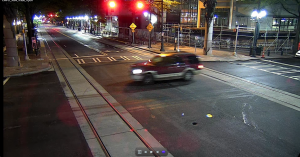 Officers responded to South Tryon Street shortly after 3:40 a.m. after being called to the scene about a car accident involving a pedestrian. Upon arrival, officers located a woman, identified as 36-year-old Fran Kelly, lying in the roadway with life-threatening injuries.

Kelly was taken to Atrium Main, where she died due to her injuries, according to police.

After an initial investigation, detectives revealed that Kelly was crossing the intersection of South Tryon Street at Trade Street when a burgundy and tan Ford Expedition came through the intersection and hit her. The driver of the Ford failed to remain on scene and failed to contact 911 to report a crash.

Anyone who witnessed or has information about the crash should contact Detective Buckley at 704-432-2169, extension 6.  The public can also leave information anonymously by contacting Crime Stoppers at 704-34-1600 or http://charlottecrimestoppers.com/.