The National Weather Service in Greenville-Spartanburg will conduct a damage survey in Rutherford County tomorrow and may extend into Burke and Caldwell depending on what they find.

CHARLOTTE, N.C. — The National Weather Service (NWS) in Greenville-Spartanburg confirmed two tornadoes touched down in South Carolina as severe storms rolled through the Southeast Saturday evening – and there may be more confirmed yet.

The humid upper 60s and 70s set the scene for severe weather for the first half of the weekend, as the warmer, moisture-laden air provided plenty of fuel for the storms that swept into the WCCB Charlotte viewing area from the southwest. Before reaching our 22 counties, though, this line of storms already had a history of damage. Trained field meteorologists from the NWS confirmed Sunday morning that an EF-1 tornado touched down briefly in Oconee County, SC, wreaking a 1.2-mile path of damage through Seneca the night before. Several buildings sustained roof and structural damage; a car was flipped and a 150-foot-tall radio tower was snapped in half like a toothpick. It should be noted that Seneca has recently seen another tornado rip through its townscape nearly a year ago: on April 13, 2020, an EF-3 twister tore through the area.

We have confirmed an EF1 tornado from Saturday evening. The tornado passed just northwest of downtown Seneca. More information can be found at this link: https://t.co/rF5eSCNl6U #scwx pic.twitter.com/3C4an4YKm6

Shocking video was captured from security cameras nearby. You can see the fast-moving twister flip a stopped car over before pushing other vehicles around in a nearby parking lot.

Holy CRAP what was the forward motion on that thing?!? 😳 https://t.co/GvZduMovQ3

The damage didn’t stop there; in fact, it was just getting started. The only other confirmed tornado from Saturday night touched down approximately an hour later at 6:40 PM in Spartanburg County. At a weaker EF-0 strength, this tornado only lasted a few minutes and caused little damage.

We have confirmed an EF0 tornado from Saturday evening. The tornado passed through the Reidville/Moore area. More information can be found at this link: https://t.co/G2AiU9sM2X #scwx pic.twitter.com/ZJee0lc7G6

While no other tornadoes have been confirmed yet, the NWS is sending another damage survey to Rutherford County in North Carolina, which was under a tornado warning from the same storm that impacted both Spartanburg and Oconee counties in the Palmetto State. The surveyors will then make a decision whether or not to look farther northward depending on what they find in Rutherford. A string of wind damage was reported from Spartanburg County all the way north into Burke and Caldwell counties in the WCCB Charlotte viewing area. Tornado warnings were also issued in Burke, Caldwell, and Avery counties. Given the bizarre path of the damage (shown below), I caught up with NWS Greenville-Spartanburg meteorologist Clay Chaney to explain what went down. 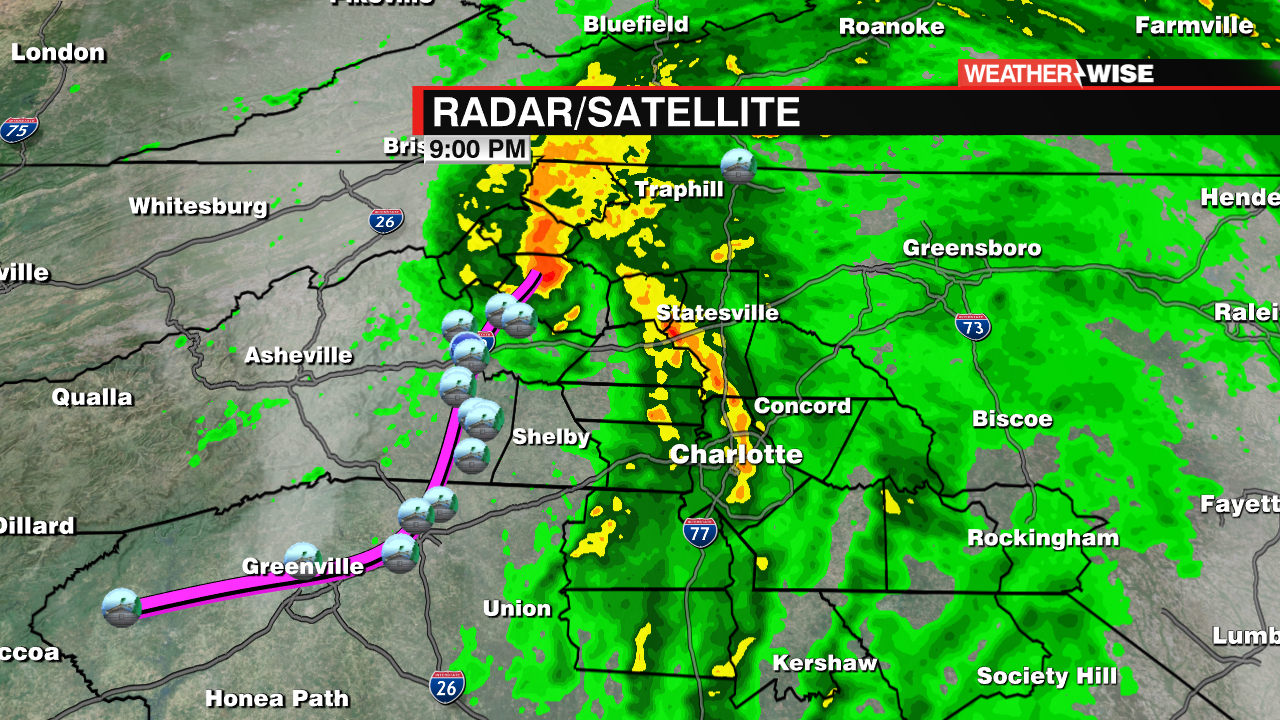 Chaney told me that this damage likely came from what’s called a mesoscale convective vortex, also known as an MCV. So, what exactly is an MCV? As the original line of storms moved from Georgia into the Carolinas and found itself in a more favorable environment, a strong updraft developed and began to rotate due to shearing winds aloft. This, in turn, created a low-pressure pocket within the line itself, similar to what you see on a larger scale when we talk about synoptic-scale areas of low pressure. MCVs are known to produce torrential rainfall, hurricane-force straight-line winds, and potentially devastating tornadoes. You may remember an MCV controversially called an “inland hurricane” that brought millions of damage to the Upper Midwest in 2009.

“If you track the path of where we saw the storm reports, you can see this little ‘squiggle’ that matches up very well with where the center of the [MCV] was located,” Chaney went on to say. Pay close attention to where the storm reports (circled) show up in the GIF below.

I’ll show you the same GIF again, but without the storm reports. Notice how the storm goes from a linear shape to a more comma-like one as it passes through Greenville, SC. You can see the rain itself twisting and turning inside the center of the MCV.

To bring the point home, take a look at the line of storms as it moved into South Carolina from Georgia: 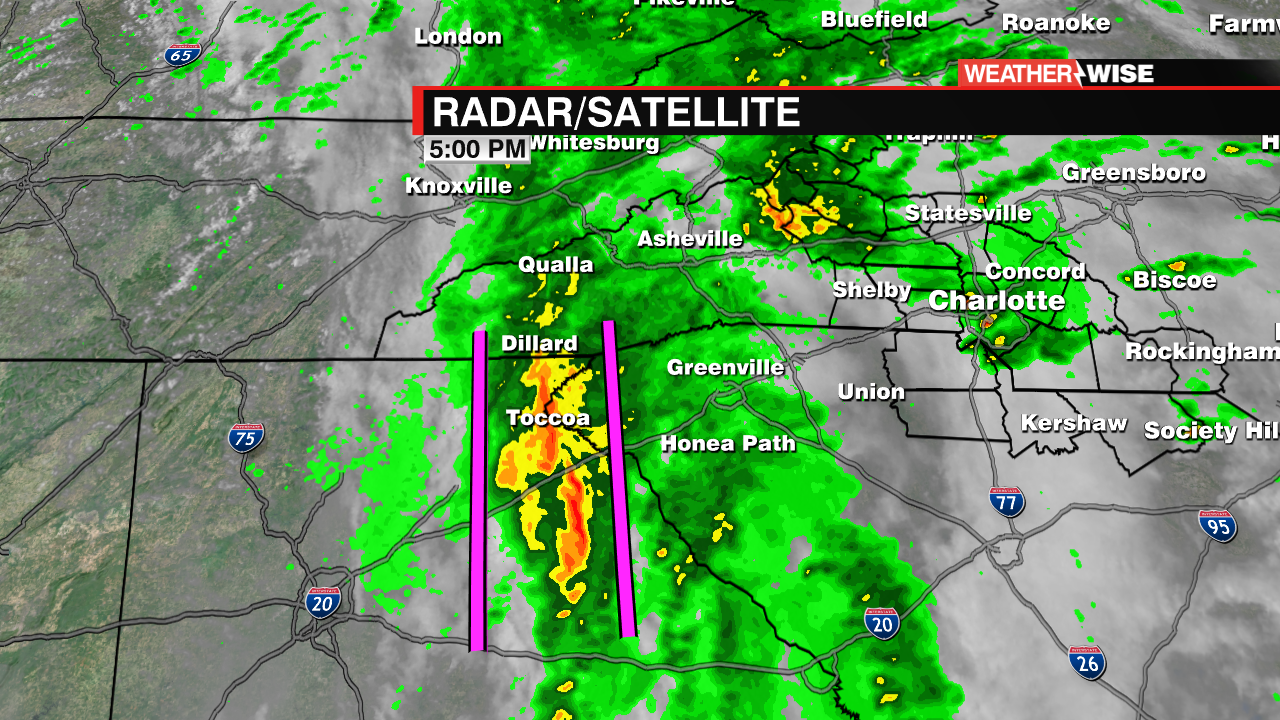 Now, compare it to how the storms looked in North Carolina: 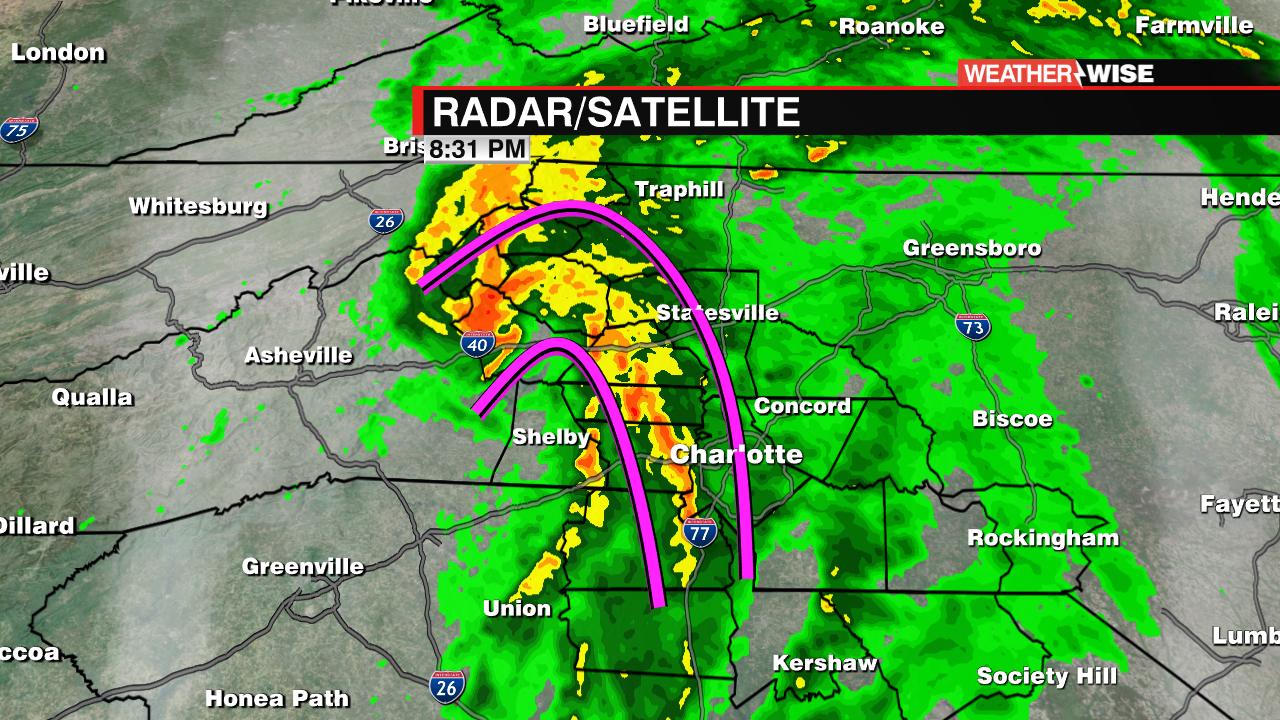 The second picture looks eerily similar to the parent area of low pressure, located several hundred miles to the northwest.

It remains to be seen what NWS surveyors will find in North Carolina. That being said, even if there aren’t any tornadoes confirmed in the Tar Heel State, this MCV will be a well-remembered storm in the Foothills for a long while.