CHARLOTTE, N.C. — A 20-year-old man has been arrested after gunfire erupted nearby children playing outside in a southwest Charlotte neighborhood, but police are asking for the public’s help identifying two more suspects involved in the shooting.

Charlotte-Mecklenburg police responded to Nations Drive on Saturday around 5:30 p.m. after reports of a shooting in the area. Upon arrival, officers located two houses and four vehicles which had been struck by gunfire from more than 50 rifle and pistol rounds, according to officials. No injuries were reported from the incident.

Through an investigation, detectives identified Christopher Gilmore as a suspect in this case. Gilmore was arrested Monday and transported for an interview with detectives. After the interview, Gilmore was transferred to the custody of the Mecklenburg County Sheriff’s Office and charged with Felony Conspiracy, two counts of discharge weapon into occupied dwelling, and four counts of injury to personal property, according to police.  He was released from jail four hours later. 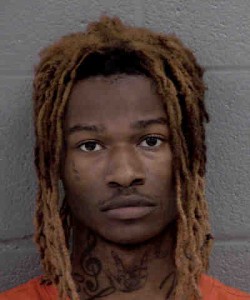 Detectives are asking for the public’s help with identifying the two additional suspects involved in the shooting that are shown in the video. CMPD shared outdoor security camera footage from the incident that shows a red car driving up to the street where kids were seen playing outside before two people got out of the vehicle and opened fire. The suspects then get back inside of the car, turned the vehicle around and drove off in the direction they originally came in.