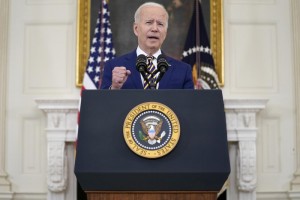 WASHINGTON (AP) – The Defense Department says the U.S. military conducted airstrikes Sunday against what it says were “facilities used by Iran-backed militia groups” near the border between Iraq and Syria.

Kirby says the U.S. military, under the direction of President Joe Biden, targeted three operational and weapons storage facilities – two in Syria and one in Iraq.

He is describing the airstrikes as “defensive,” saying they were launched in response to an “ongoing series of attacks by Iran-backed groups targeting U.S. interests in Iraq.”