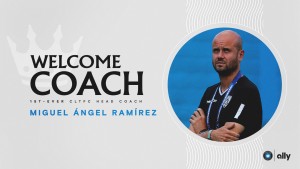 CHARLOTTE, N.C. — Charlotte FC today announced that it has reached an agreement with Spanish coach Miguel Ángel Ramírez to become the club’s inaugural head coach. Ramírez’s addition to the club is pending receipt of his work visa and he will officially begin his tenure in August.

“I’m excited to introduce Miguel as the first head coach of Charlotte FC,” said Owner David Tepper. “After a thorough review of many candidates, it was obvious to us that Miguel was the right person to lead our team. He is a process-oriented coach with a unique style of play and a proven ability to develop young talent. Those attributes set him apart from others. He will bring a winning culture to Charlotte FC and I can’t wait for him to get started and for this club to take the pitch in 2022.”

“With his charisma, passion for the game and experience in the Middle East, Europe and South America, Miguel will work to create an innovative, entertaining approach to soccer in the Carolinas,” said Sporting Director Zoran Krneta. “In Miguel, we have found a very progressive and talented young coach to take on the challenge of growing the team with a distinctive style of play, developing youth players and driving our vision forward.”

The native of Las Palmas, Spain, began to train as a coach in the lower categories of the Unión Deportiva Las Palmas and Deportivo Alavés, two very representative clubs of LaLiga in Spain. He moved to Greece in 2011 with AEK FC, Panathinaikos and Olympiacos. Ramírez also spent six years at the Aspire Academy in Doha, Qatar, where he coached the Under-12, Under-13, Under-16 and Under-17 sides. Ramírez served as head coach of the Under-17 and Under-14 Qatar national soccer teams and as assistant coach for the Under-19.

“I am honored to have the opportunity to work with Charlotte FC, its ownership group and senior management. Next year will be historic for the team and for all new and existing fans as we prepare toward a remarkable inaugural campaign,” said Ramírez. “I am committed to create an entertaining, competitive club with talented young players and a unique style of play, as we build a stronger soccer culture from North to South Carolina.”

Ramírez is considered one of the top up-and-coming coaches in South America. He currently resides in Canary Island, Spain, and will be relocating to Charlotte, NC, this summer. A formal press conference will be held later in July.