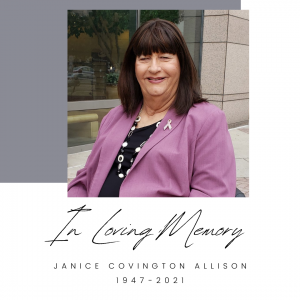 CHARLOTTE, N.C. — Janice Covington Allison, a transgender woman who became a strong Democratic activist on behalf of LGBT rights in Charlotte, has died at age 74.

Allison died Friday at Atrium Health Mercy hospital, according to a friend, September McCrady. McCrady, who had been in contact with Allison’s wife, said on Monday that her health had declined with kidney troubles.

Allison became the first transgender woman to represent North Carolina at the Democratic National Convention when she was elected a delegate to the 2012 convention in Charlotte, a news outlet reported.

Allison also ran unsuccessfully for North Carolina Democratic Party chair in 2015, and was also the party’s diversity and outreach chair.

A Delaware native, Allison served in the military and ultimately moved to the Charlotte area in the 1970s. Dressed as a male, she was a volunteer fire chief in Cabarrus County.

“I was living two lives, yelling at men to get on a ladder and put out a fire by day, and going to clubs at night as Janice … wearing a miniskirt and heels,” Allison told reporters.

In a statement over the weekend, North Carolina Democratic Party leaders called Allison “a fearless LGBTQ+ advocate and champion for the transgender community.”