The Charlotte-Mecklenburg Police Department has identified the two people who died in a southeast Charlotte crash Monday afternoon.

Officers responded to Randolph Road around 2:40 p.m. Upon arrival, officials located two vehicles – a 2001 International 4000 and 2002 Acura MDX both with heavy front-end damage.  The driver and passenger of the International were found on the scene of the crash with no injuries, while the driver and passenger of the Acura were located on the roadway with serious injuries.

Medic pronounced the driver of the Acura, identified as 37-year-old Christopher Hargrett, and passenger, identified as 54-year-old Eric Adams, dead due to injuries they sustained from the crash.

Through an initial investigation police revealed that the Acura was traveling in the right lane inbound on Randolph Road when it veered to the left, passing through the left lane over the cement median and into oncoming traffic before striking the International head-on.  The Acura then spun 90 degrees causing the driver and passenger of the Acura to be ejected from the vehicle. The driver and passenger of the Acura were both not wearing seatbelts at the time of the crash.

The driver and passenger of the International were both wearing their seatbelts at the time of the crash. Impairment and speed are suspected as contributing factors to this collision, according to police. 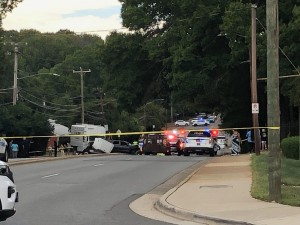 CHARLOTTE, N.C. — A Monday afternoon collision between an SUV and a large truck on Randolph Road took the lives of two people, according to Charlotte-Mecklenburg police.

Emergency crews blocked off the 4300 block of Randolph in both directions between Woodlark Lane and Greenwich Road near the busy Cotswold shopping center. The crash happened around 2:30 p.m.

Mecklenburg EMS says both people were pronounced dead on the scene. Their names have not been released.

Police are investigating what caused the crash.