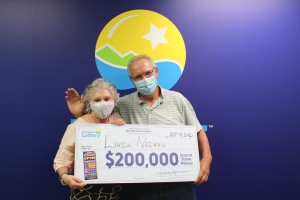 Attached is a photograph of Linda Nadeau and her husband, Keith, celebrating their win with their “Big Check.” (NC Education Lottery)

LENOIR, N.C. (News Release) — The tug of just a lucky feeling led Linda Nadeau of Lenoir to stop on the way home from getting her car serviced Tuesday and win a $200,000 prize.

The stop came at Ellie’s Crossroad Market on Morganton Boulevard. The ticket Nadeau got was a $10 Bigger Spin scratch-off.

Nadeau and her husband have always owned rescue dogs. While she is still deciding how best to spend her prize money, one thing for sure is that the couple’s Yorkie, bichon and mixed-breed will be well taken care of.

“I told my little dogs, ‘well now you can sure have all the chicken jerky treats you want!’” Nadeau said after learning about her win.

Nadeau said the win brought a bright note to a day spent paying for a car repair and updates for family phones. She claimed her prize Wednesday at lottery headquarters in Raleigh. After required federal and state tax withholdings she took home $141,503.

The retired warehouse assistant said she always dreamed about winning a lottery prize. “Somebody has to win the big prize,” she said, “and it might as well be me.”

The Bigger Spin game launched in September with five $200,000 prizes that could be won instantly. Three $200,000 scratch-off prizes remain to be won. The game’s biggest prize will come to five lucky winners who get to participate in a live event where they spin a giant prize wheel for a prize ranging from $400,000 to $2 million. All five “Bigger Spin” events remain to be won.

A $15 million grant, using money raised by the lottery, is helping Caldwell County build the new Granite Falls Middle School, scheduled to open this winter. For details on other ways Caldwell County benefits from lottery funds, visit www.nclottery.com and click on the “Impact” section.