Charlotte-Mecklenburg detectives have located and charged Ja’Miel Catlett, 38, for the murder of Eileen Rosado after a shooting near Uptown Charlotte.

On December 1st, detectives with the CMPD’s Violent Criminal Apprehension Team worked with members of the High Point Police Department to find and arrest Catlett in High Point, N.C.

Police say following an interview with detectives, Catlett was taken into custody of the Mecklenburg County Sheriff’s Office and charged with Murder and Possession of a Firearm by a Convicted Felon.

The Charlotte-Mecklenburg Police Department is asking for the public’s help in locating a man who is wanted for the murder of a 40-year-old woman.

Through an investigation, detectives identified 38-year-old Ja’Meil Catlett as the suspect in the homicide case of Eileen Rosado. Warrants for first degree murder and possession of a firearm by a convicted felon were issued for his arrest, according to police.

Detectives with the CMPD’s VCAT launched apprehension efforts; however, Catlett still remains at large. Police say Catlett should be considered armed and dangerous.

Anyone in the public who has information on the whereabouts of Catlett is asked to call 911, immediately.

The public can also leave information anonymously with Crime Stoppers at 704-334-1600 or http://charlottecrimestoppers.com/. 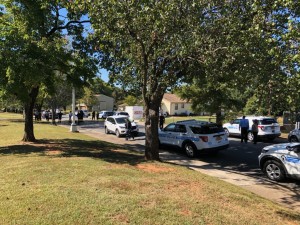 CHARLOTTE, N.C. — The Charlotte-Mecklenburg Police Department is conducting a homicide investigation after a woman was killed just outside of Uptown Charlotte Wednesday afternoon.

Police responded to the 1400 block of Spring Street, near intersection of Statesville Avenue and Oaklawn Avenue, according to a 1 p.m. tweet from CMPD.

When they arrived, officers located a woman with an apparent gunshot wound. The victim, identified as 40-year-old Eileen Rosado, was pronounced dead at the scene by Medic.

From the information provided by witnesses, detectives had reason to believe the suspect was possibly still on the scene. Out of an abundance of caution, the CMPD’s Special Weapons and Tactics (SWAT) Team responded to assist with a search for the suspect, who was determined to have fled the area.

When they first arrived, officers thought the suspect could still be inside the house where the homicide occurred, and SWAT negotiators called out to the suspect on loud speakers. When SWAT entered the house, they did not find the suspect inside.

Anyone with information about this incident is asked to call 704-432-TIPS and speak directly to a Homicide Unit detective.