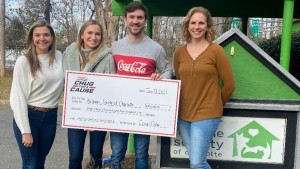 CHARLOTTE, N.C. (News Release) — The Humane Society of Charlotte (HSC) welcomed NASCAR’s Daniel Suárez, driver of the No. 99, Chevrolet Camaro, back to the shelter on Thursday morning and received a generous $43,500 donation.

Suárez helped raise the funds throughout the NASCAR season as part of the Coca-Cola Chug for Charity program, sponsored by Coca-Cola Racing. This is the second year Suárez has supported HSC through this program.

The Coca-Cola Chug for Charity program began in 2002 as a way for NASCAR drivers to raise money for their favorite charitable organization. Every time a driver takes a chug of Coca-Cola at the racetrack during the season they earn points, which in turn earns donation dollars for their favorite charity. The NASCAR driver with the most points/largest charitable donation at the end of the year is declared the Chug for Charity Champion, and each driver donates their earnings to the charity of their choice.

Daniel Suárez supports the Humane Society of Charlotte, not only by donating his Chug for Charity dollars but also by adopting from the Humane Society of Charlotte. When Suárez and his partner Julia Piquet visited the shelter and donated in January of 2021, they took home their cat Nicky. When they returned to donate again this week, they took home another cat in need of a loving home – Kuvira!

Suárez has been caring for and saving animals since childhood. Rescuing runs in his family and everyone from his father to his sister have spent many years rehabilitating and finding homes for animals that they found as strays in their native Mexico.

Suárez and Piquet now live in Charlotte with their three rescue animals: Emma the dog, Nicky the cat, and their newest addition Kuvira. They continue to support the efforts of the Humane Society of Charlotte throughout the year and are excited for the grand opening of the new HSC Animal Resource Center this spring.

To learn more about this ongoing project, visit anewhomeforhsc.org