A 17-year-old charged with murdering two teens in the middle of a Rock Hill neighborhood stood before a judge, and the family of the victims.

Omarian Small, Kam’ran Brevard, and Evanta Hart were all killed.  Investigators say the gunfight happened as a result of an ongoing dispute between two groups.

Hart’s mother spoke out during a bond hearing for Coleman.

“I have no anger in my heart for him your honor.  But, I don’t want him on the streets to be harming anyone else,” says Jacqueline Watson, Hart’s mother.

Rock Hill Police have also charged a 16-year-old girl with murder in connection with the death of Omarian Small.

Police say around 10:09 p.m., three teenage boys were sitting in a car parked on Gist Road.

While they were sitting there, detectives say two other boys, 17 and 16-years-old, approached the car on foot and began firing guns into the occupied vehicle.

Police say 16-year-old O’Marian Small, who was seated in the driver’s seat, was fatally struck.

Ahmik Coleman, 17, of Rock Hill, seated in the front passenger seat, returned fire and struck the two shooters on the roadway, according to a news release.

Officers say a backseat passenger in the vehicle then exited fleeing the scene.

Police say Coleman also excited the vehicle and fled on foot, but immediately returned to firing his weapon again fatally striking the two men down on the roadway.

Officers arrived on the scene after receiving calls about the shooting.

Police say the 17 and 16-year-olds who approached on foot were both found dead as well as the 16-year-old seated in the driver’s seat.

Coleman was taken for treatment at a nearby hospital for a gunshot wound to his hand, according to a news release.

After establishing the chain of events in this incident, detectives issued two Murder warrants for Coleman charging him as an adult. 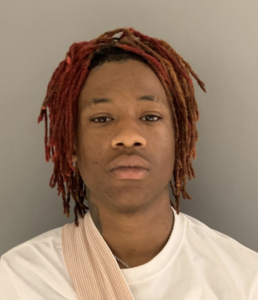 On Thursday night, Coleman was brought to the Law Center and taken into custody for his warrants, according to a news release.

The investigation into this deadly shooting remains active and ongoing.

All three gunshot victims of the Rock Hill triple homicide Tuesday night have been identified, according to the York County Coroner’s Office.

Authorities say the first victim O’Marian Small, 16, of Lake Wylie was found dead inside a car at the scene.

The second victim, Kam’ran Brevard, 16, of Rock Hill was also found dead at the scene, according to a news release.

Authorities say the third victim of the shooting, Evanta Hart, 17, was taken by EMS to Piedmont Medical Center where he later died from his injuries .

Officers found two men in the road suffering from gunshot wounds. One man was pronounced dead at the scene, and the other man was taken to Piedmont Medical Center where he was later pronounced deceased.

A third man suffering from gunshot wounds was located inside a parked vehicle and was pronounced dead at the scene.

A fourth man was shot in the arm and is expected to be okay.

Neighbors are stunned by the violence.

“It’s a really quiet neighborhood, something like this goes on next door to us and it shakes you up a little bit,” says one neighbor.

A 28-year-old man faces multiple charges after allegedly crawling through the window of a north Charlotte home on Thursday and sexually assaulting a woman just two days after being released from prison for rape.

A young survivor of the massacre at a Texas elementary school says she covered herself with a friend’s blood and pretended to be dead while she waited for help to arrive.

Lincoln County detectives are searching for a suspect after they were caught on surveillance cameras stealing from a T-Mobile store on Thursday.

A 13-year-old under arrest for having a loaded gun at a South Carolina mall apparently sneaked a second loaded weapon into the facility where he was taken.

A couple has been charged with animal cruelty after authorities seized 49 rabbits, seven cats, and 24 dogs from their Lenoir, N.C. home.

Authorities say nearly 20 officers gathered in the hallway of a Texas elementary school for more than 45 minutes before agents used a master key to open a door and confront a gunman.