Let’s cut straight to the chase….get to Hadley Theatre to see Becoming Dr. Ruth.  It’s one of the best performances I’ve seen from Actor’s Theatre of Charlotte (ATC).

I’m not going to lie, I am a big fan of ATC.  I’ve been to most of their shows in the last several seasons.  I fell in love with some of their classics: The Great American Trailer Park Christmas Musical, The Rocky Horror Picture Show, Rock Of Ages, Nina Simone: Four Women, and many more.  But Becoming Dr. Ruth hits different.

The show is about sex therapist – single mother – sniper – Dr. Ruth Westheimer.  You know, the old lady who talked about sex late nights in the 1990’s.  Who knew she was a sniper?!

Actress Sheila Proctor nails this performance.  The look, the accent, the cadence in her speech.  She is the perfect Dr. Ruth.  Proctor is so good, rumor has it she stays in character as soon as she puts on her costume…no matter who is around.

Proctor becomes fully immersed in the character and delivers a phenomenal performance throughout the 100-minute show.

I will be honest when I say I was reluctant about a one-person show but Proctor pulled every scene off like it was her story to tell.

Not only did Proctor perfectly deliver every line, she also recited historic timelines of World War II and the Holocaust.  Throughout the entire performance she effortlessly recounted world history like she was reading straight out of an Encyclopedia.

The ATC production staff also did an amazing job helping the audience get a better picture of Dr. Ruth’s past by projecting photos of her family on boxes stacked to the rafters.  The nostalgia of the cordless phone used on the set literally took me back to my childhood.

The main scene portrays Dr. Ruth as she is preparing to move.  While packing, she reminisces on her past experiences.  It starts with a brief history of her parents and grandparents, her family being separated and imprisoned during World War II, her life as an orphan, falling in love (multiple times), becoming a sniper in the Israeli Army, and then becoming one of the most well known sex therapists in the United States.

Proctor truly sets the tone as she seamlessly moves from telling jokes to educating the audience on the realities of being an orphan who lost their entire family during the Holocaust.  Like I mentioned above, it’s raw.

Before I even realized it, I was wiping tears from my face as the audience rose to our feet to give Proctor a standing ovation for her outstanding performance.  So like I said above, get to the Hadley Theatre and watch this show and in the words of Dr. Ruth herself, “Get Some!” 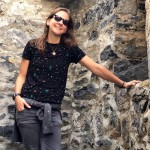 Healthy Headlines: Mindfulness In The New Year And All Year Long