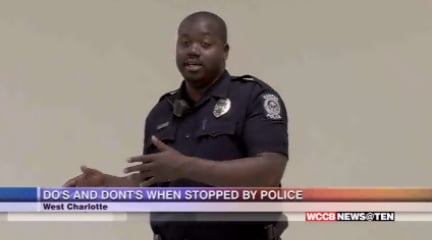 CHARLOTTE, N.C. — Johnson C. Smith University Campus Police Department on Friday hosted an informational session on “What to Do when Confronted by Police.”

Campus Police provided a list of Do’s and Don’ts for reference if you are ever stopped by the police while in your car:

•As soon as you notice the police emergency lights, pull your vehicle over to the right and stop immediately.

•Keep your hands easily observable, preferably on the steering wheel where they can be easily seen by the approaching officer. Reaching under your seat or into your glove box are actions that will cause the officer concern that you may be reaching for a weapon.

•If you wish to inquire as to why you were stopped or offer an explanation, do so before the officer returns to his or her vehicle.

•Answer all questions honestly. Information pertaining to prior arrests or traffic violations is easily verified via the police dispatcher.

•Do not become argumentative, disorderly, or abusive. If an officer has already written a ticket, it cannot be voided at that time. If you believe that you have been unfairly treated, DO NOT make that argument on the side of the road. Your best alternative is to carry your protest to Traffic Court.

•Whether an officer issues you a ticket or gives you a warning is entirely up to their individual discretion. Your conduct during the stop may influence the officer’s decision.

•Don’t be offended. Most citizens already realize that law enforcement is a difficult and dangerous profession. For these reasons, police officers tend to be extremely cautious. They may seem standoffish, impolite, or offensive to students who may not consider such precautions necessary.

If the Police Approach You on Campus or on the street:

Innocent individuals are often offended or angered, or both, because an officer detains them for questioning. Although the delay might be inconvenient, the officer believes there is a reason (reasonable suspicion) to stop you and ask questions. Most of these stops are not officer-initiated. The most common reasons that cause an officer to stop someone are as follows:

•You might be one of only a few people walking around in the vicinity of a crime that has recently occurred.

•Your clothing might be similar to that worn by the perpetrator of a crime.

•Someone may have called the police complaining about your presence or that you look “suspicious.”

•Someone may have pointed you out to the officer.

•You might be acting in a manner that the officer considers “suspicious.”

In All Police Encounters:

•Avoid making sudden movements (for your wallet, into your coat, toward your waistband, etc.) until you have informed the officer of your intention to do so and the officer has said it’s okay.

•Do not carry weapons (real or otherwise) or even joke about having a weapon on your person.

•Remain calm and avoid being argumentative. If you are uncooperative and refuse to answer reasonable questions, the officer is likely to become more suspicious and the encounter will probably last much longer than necessary.

•Comply first, then you may seek an explanation from the officer or the officer’s supervisor later.