The Edgeitators: Free Speech? Or Over the Line? 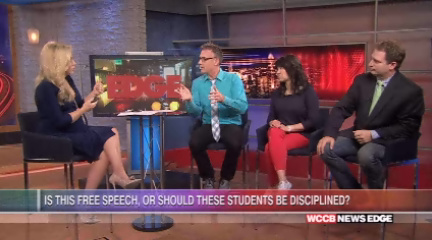 Following a day of silence in support of bullied LGBT teens, a group of anti-gay Pittsburgh high schoolers decided to hold “Anti-Gay Day” at the school last week.

They drew anti-gay slogans on their hands, wore matching flannel outfits and, allegedly, created a “lynch list” of kids who support the school’s gay-straight alliance.

“At this time, no witnesses have seen the rumored “lynch list” that was mentioned in previous news reports.  Our investigation is ongoing, and we encourage anyone with information to contact the school district immediately.”

So what do you think?  Was Anti-Gay day free speech?  Or should these students be disciplined?