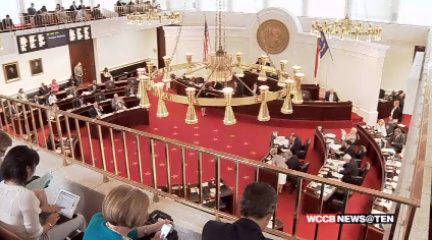 RALEIGH, NC — The controversial Religious Freedom Bill is dead in North Carolina.  It would have allowed businesses to deny services to people for religious reasons.  Similar bills passed in other states prompted threats of boycotts from major corporations.

The Charlotte Chamber is against it; the Governor has said it’s senseless.  The bill’s sponsors won’t even talk about it publicly.  It’s so controversial some say it makes it legal for businesses to discriminate against the LGBT community.

Two sides may never see eye to eye on this bill.  State House Speaker Tim Moore confirmed Thursday that lawmakers won’t debate this question this session: Would the Religious Freedom Act allow businesses to deny services to gays and lesbians?

“Gay rights are obviously at the forefront of a lot of discussion right now, so it comes across as discriminatory,” said Charlotte resident Chris Fowler.

“It’s their business.  They ultimately have the right to do what they want with their properties,” said Charlotte resident Everett Newell.

Voters on the street reflect local business owner attitudes whom WCCB Charlotte spoke to when the legislature introduced the bill.  But Charlotte Chamber of Commerce is relieved legislators decided to kill the bill this session, writing: “It would enable discrimination against individuals in our state.  We believe that it would be harmful in the effort to recruit new jobs and investment.”

“I wouldn’t have supported the new bill, so I’m glad it’s not going to be considered this go around,” added Fowler.

“That might have been a step in the opposite direction,” said Fowler.

“If I want to run my car into a wall, it’s my car. Sorry for their wall, but it’s still my car,” said Newell.

Legislators could introduce the bill again next year.