RALEIGH, N.C. (AP) — Maybe television’s “The Profit” won’t have to make business deals behind bars after all. 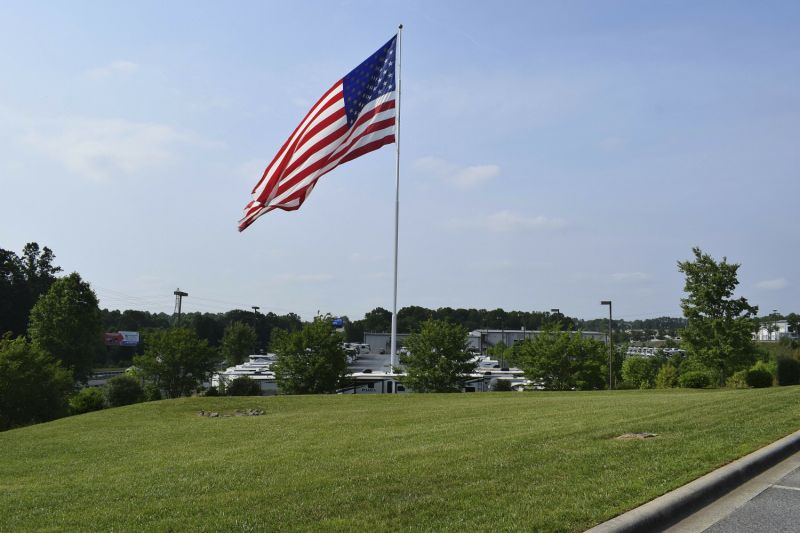 Marcus Lemonis, star of CNBC’s so-named reality television show, had said Wednesday that he would go to jail before he’d remove an enormous flag that flies at a recreational vehicle store in violation of the city of Statesville’s size ordinance. But later in the day, the city said in a news release that its leaders will consider a change that would allow the flag displayed at Gander RV along Interstate 77 to continue flying.

Mayor Costi Kutteh said the matter should be resolved at the council’s meeting on July 15.

But that’s not enough for Lemonis, who’s the chief executive officer of Camping World, which owns Gander. He wants no restrictions on the size of an American flag, provided neither it nor its pole poses a safety hazard for people or air travel.

“I don’t think there should be any ordinance of any kind regulating the size of the American flag” unless it poses a hazard, he said.

Before the city’s change of heart, Lemonis had said that he understands that Gander RV isn’t complying with the city’s ordinance — but he said the flag would stay even if he’s jailed for contempt of court.

“I would prefer not to (go to jail),” he said. “It’s not a super-favorable outcome. But that’s how big a line in the sand this is for me.”

His attorneys still planned to file a response Thursday even though the city likely will change its ordinance, he said. The legal response will rely on the First Amendment that guarantees freedom of speech and a North Carolina law that says reasonable restrictions on the size of official governmental flags are allowed if necessary to protect public health, safety and welfare.

He also plans to visit Gander RV on Thursday afternoon.

People have questions and are demanding answers… I’ll be in Statesville late Thursday afternoon to discuss the American Flag. If you or someone you know has a feeling about this you are welcome to come regardless of your position. https://t.co/BS7m37S639 pic.twitter.com/DSRkpI8PzV

Statesville, about 40 miles (64 kilometers) north of Charlotte, sued over the flag earlier this month and asked the court to order Gander RV to comply with the ordinance. Meanwhile, the company had faced fines of $50 a day that dated to October 2018, when the city says it advised Camping World that the company would be fined until the flag is replaced with a smaller one.

Lemonis said he has 180 stores with flags, the vast majority the same size as the one in Statesville.

Social media posts trended in Lemonis’ favor with comments such as one noting that Lemonis is an immigrant and U.S. citizen and saying he “has more pride in America and the flag than the city of Statesvilles’ representatives.”

Some of those feelings were reflected in the city’s statement. “Some terrible things have been said about our wonderful town, and it hasn’t come from our citizens,” the mayor said. “But people from all over the country have jumped on this issue and called us names I can’t repeat.”

Lemonis’ response to supporters who engaged in name-calling: Cut it out — this isn’t third grade. But then he described the city council as “a bunch of bureaucrats in a small town in North Carolina who decided that the size they deem appropriate is going to be in the ordinance.”

Lemonis, who was born in Lebanon and adopted by American parents, said some people had told him on the phone that he should leave the U.S. “You’re not from here; you don’t follow our laws; get out of our country,” he said, quoting the callers. “People have opinions.”

Several people tweeted that they believe the controversy is really a marketing ploy.

Gander’s original permit application, filed in June 2018, said it was erecting a 40-foot-by-25-foot flag, which complied with the city code. In September 2018, Camping World informed the city of the flag’s actual, larger dimensions, the city said in a statement.

As “The Profit” on TV, Lemonis invests in failing businesses and tries to turn them around. Regardless of the amount of his investment, he always tells the owners that he’s “100 percent in charge.”

Lemonis said his love of big flags dates to his childhood in south Florida, where he says his family flew flags at car dealerships they owned. “The flag was a very big symbol,” he said.

Now that’s he’s an adult with his own stores, “if there is a way to put up a bigger pole, a bigger flag, we will do it,” he said.