SCS has been notified of additional information that could compromise safety measures in place for sporting events. Upon receiving information, the NSHS football game scheduled for 9/20/19 is canceled. Safety is our first concern. https://t.co/jxIBaqzNjx pic.twitter.com/pChtIO0xMX

Officials say the decision was made after receiving additional information around 3pm that could “compromise safety measures” that are currently in place for sporting events.

Dozens rallied across the street from the high school Friday night instead.

#BREAKING: Stanly County Schools says the North Stanly High School football game scheduled for Friday night has been cancelled due to safety concerns. Supporters of the cheerleading squad say they won’t be silenced. This man drove from Waxhaw to be here. @WCCBCharlotte pic.twitter.com/8KtsiGve6T

Early Friday afternoon, the district had announced there would be an increased police presence as well as additional staff at the game. The precautions were being taken due to a recent political controversy sparked by a photo of the North Stanly cheerleading squad holding a “Trump 2020” banner.

The school did not punish them, but the State Athletic Association put the squad on probation for the rest of football season. The district says there is a policy against distribution of campaign material at a school events, and the cheerleaders being representatives of the school in uniform, may give the impression the school or district is endorsing a political campaign.

“Our liberties are being taken from us day by day, minute by minute, hour by hour they’re gaining ground. I’m tired of it,” says Jeremy Onitreb.

WCCB Charlotte’s Alexandra Elich went live on Facebook at the rally where a number of people think the district did the right thing.

One of the district supporters commented, “They can do what they like when they aren’t representing the school.”

Another said, “They broke a rule y’all trying to make it into some political rights thing. The bottom line is they knew the rules they broke them they are being punished.”

HAPPENING NOW: A rally to support North Stanly High School cheerleaders after they were put on probation for holding a political sign. Supporters were going to go to a football game tonight, but that football game was canceled citing safety concerns. Alexandra Elich WCCB is live there now:

Stanly County Schools says Rowan-Salisbury Schools support the decision to cancel tonight’s game, and apologize for any inconvenience this may cause. The district says safety for the students, athletes, staff, and community is their number one concern.

NEW LONDON, N.C. (AP) – A high school cheerleading squad in North Carolina is on probation after some cheerleaders posed with a banner supporting President Donald Trump before a football game. 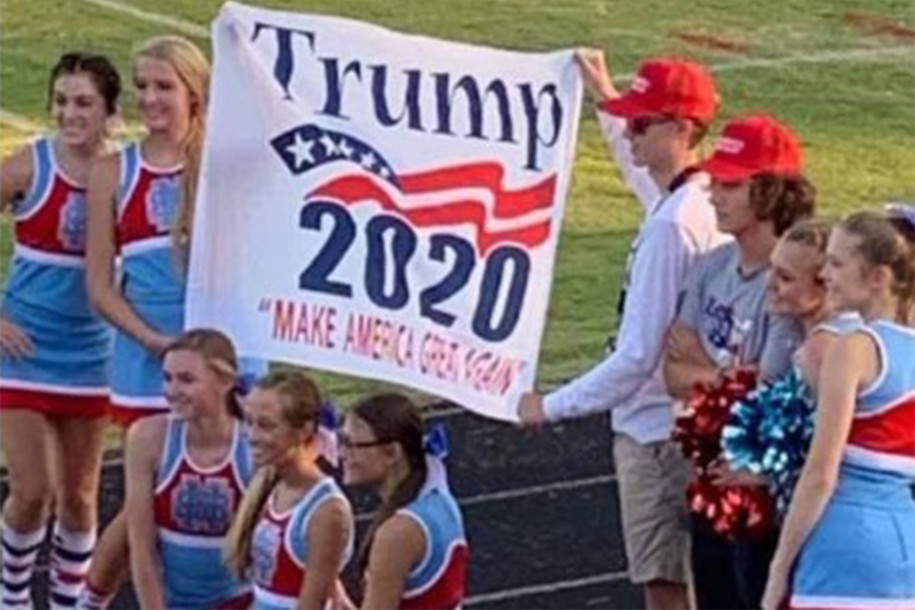 The superintendent said the probation simply means “don’t do it again.” He says all North Carolina schools have a policy against displaying political signs.

The district said the banner’s display wasn’t planned or endorsed by the school or staff.

WCCB reached out to the Stanly County School District and they responded with the following statement:

Stanly County Schools is aware of the public interest regarding North Stanly High School student athletes during a football game on August 30, 2019.

It is important to clarify the following points as it relates to this issue:

Again, the focus of Friday night football games should be on our students – the players, cheerleaders, band members – the focus should not be on politics. For this reason, we are hopeful the situation will resolve, and our student athletes can have a successful fall season and unite the Comet school spirit for the remainder of the year.

His letter can be read below:

It has recently come to my attention that cheerleaders at North Stanly High School were put on probation for the remainder of their season because they were pictured with other students holding political sign at a football game.

As the representative of Stanly County, I am appalled these students are being punished for exercising their First Amendment right to free speech.

As leaders, we should be encouraging America’s youth to participate in our democracy and political process – not punishing and silencing them. These North Stanly students respectfully displayed a sign and took a picture. They did not cause a scene, participate in a protest or break any school code of conduct.

In fact, the Stanly News and Press reported, “the school system did not discipline any of the students because there were no violations of the student code of conduct.” Why were they put on probation by the North Carolina High School Athletic Association (NCHSAA) and what specific NCHSAA rule(s) did they violate?

At the end of the day, these students have a First Amendment right to free speech, and the NCHSAA should immediately reconsider this unfair punishment. I ask this not only as the federal representative of Stanly County, but also as a proud graduate of North Carolina public schools and a former NCHSAA athlete.