CHARLOTTE, N.C. — As the Panthers continue to win with Kyle Allen at quarterback, debate swirls about the future of Cam Newton.

The Carolina Panthers are 4-2 and quarterback Kyle Allen is 4-0 as a starter this season.  The offense has found a rhythm they were unable to find during the two games in which Newton was under center this season. 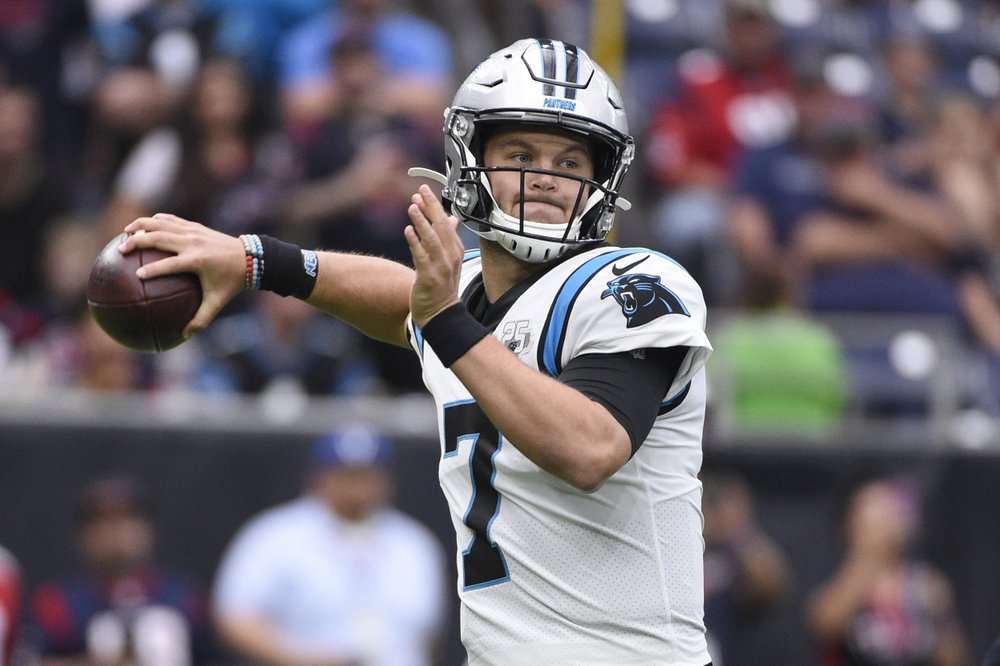 If  you don’t like Cam, it is easy to see this as an opportunity for the franchise to move on from the player who, in the 2015 season, was the league MVP and took the Panthers to the Super Bowl.

He is an exceptional talent.  It is not easy to be the NFL MVP or lead a team to the Super Bowl.  Haters should put some respect on his name.

Newton was working himself back into form following off-season shoulder surgery when he suffered a serious foot injury in the preseason.  He probably shouldn’t have played in the first two games, but he did and the results weren’t flattering. 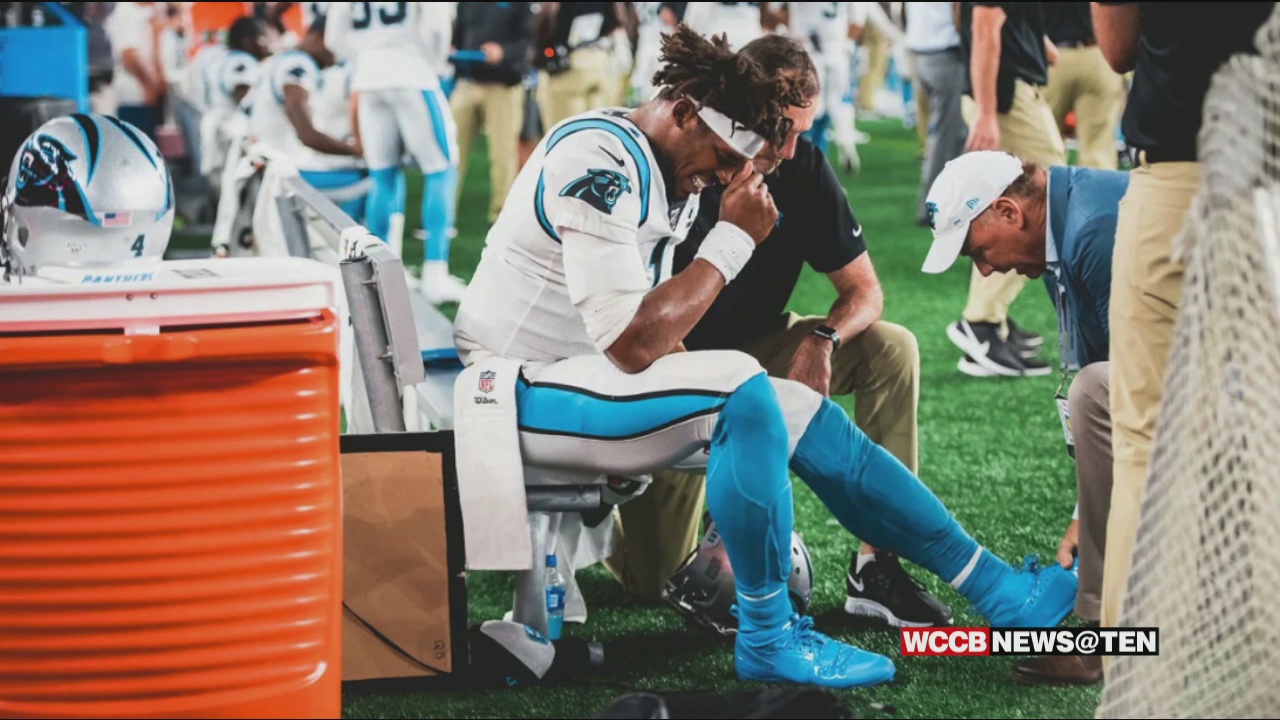 But the fact remains, the Carolina Panthers are on a four-game win streak with Allen at quarterback. Without understating Allen’s role, the other factors that have contributed to the team’s success can’t be overlooked.

Christian McCaffrey leads the league in yards from scrimmage, with 923, and is on pace to break Chris Johnson’s single-season record of 2,509.  McCaffrey has been sensational and his play making ability has allowed Offensive Coordinator Norv Turner to keep defenses off balance.  Allen is averaging only 30 pass attempts per game.  Newton averaged 44.5 pass attempts in the two games he played, according to NFL.com.

Carolina is understandably leaning on McCaffrey with a young quarterback at the helm.  The concern for everyone is whether or not the talented running back can shoulder such a heavy workload for an entire season. 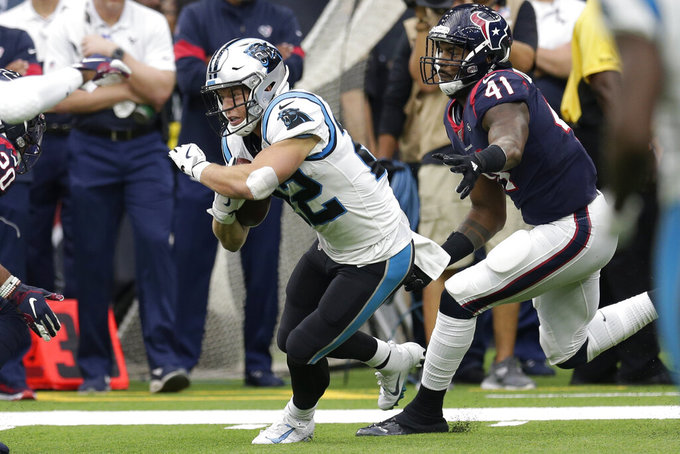 Carolina Panthers running back Christian McCaffrey (22) runs past Houston Texans inside linebacker Zach Cunningham (41) during the first half of an NFL football game Sunday, Sept. 29, 2019, in Houston. (AP Photo/Michael Wyke)

According to NFL.com. The defense leads the league in sacks, with 27.  The unit is also second in interceptions with nine and total takeaways with fifteen.  Mario Addison and Brian Burns are wreaking havoc on opposing quarterbacks and the defense is very well coordinated in their pass coverage. Luke Kuechly and Shaq Thompson are tackling machines.  The Panthers defense looks the part of a Super Bowl contender so far. 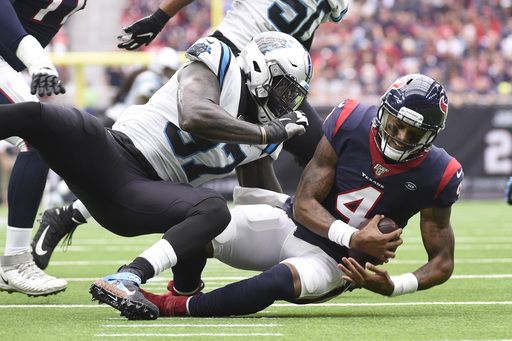 The Panthers are the third least penalized team in the league with only 31 penalties called against them through six games.   The team is disciplined and isn’t making silly mistakes that costs teams field position or possessions.

Undoubtedly, the team around Allen has been superb, but he has been equally as good.

According to the Washington Post, Allen is sixth in the NFL in completion percentage for first downs on third downs, at 45.9%.  He ranks ahead of future Hall of Fame quarterbacks like Tom Brady and Russell Wilson, and last year’s league MVP, Patrick Mahomes.

When the Panthers need to make a play to continue a drive, Allen is highly adept at doing so.  Those extended possessions lead to positive momentum and often turn into points, as the Panthers rank 5th in the NFL in scoring at 27.7 points per game.

Allen excels at anticipating when his receivers will be open and is extremely accurate as a passer.  These are areas that Newton has struggled, even when healthy.   What Allen lacks in athletic ability he makes up for with these skills.

Aside from the well publicized fumbling issues, Allen has avoided costly mistakes.  He has not thrown an interception in 122 attempts this season and has thrown seven touchdown passes.

More than anything, the Panthers are in a very good rhythm as a team.   The coaches are comfortable calling plays and the players are executing with less mistakes than in past seasons.   Allen has not been asked to carry the team, but he has made the right plays when called upon.

Allen deserves credit for being prepared and doing his job better than anyone could have expected.

I don’t necessarily think Allen is a better quarterback than Cam, at this point in their careers, but it is hard to argue with the results.  Allen has proven to be the right player at the right time for the Panthers and it will be difficult for Head Coach Ron Rivera to make a change at quarterback with the team playing so well collectively. 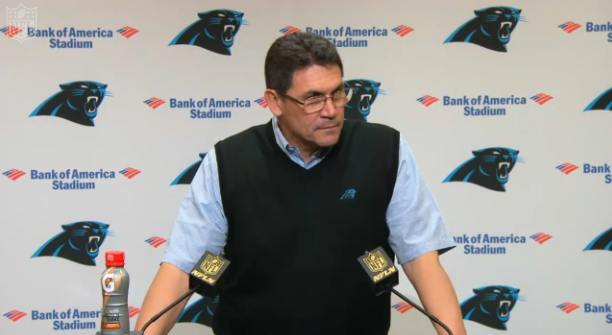 I think the Panthers will let Allen play as long as he is healthy and the team is having success.  Changing quarterbacks while the team is performing so well could cause divisiveness within the locker room. With that said, at some point, Panthers owner David Tepper and Rivera will need to make a business decision regarding which quarterback they view as the future of the franchise.

Like it or not, Cam Newton is a Hall of Fame caliber player and benching, or trading, him in favor of an undrafted free agent who has won five games in his career is a risky, franchise altering decision.

However, in 2001, Tom Brady found himself in a similar situation as Allen, when Drew Bledsoe was injured in week two of the regular season.  So you never know, crazier things have happened.