Gov. Roy Cooper held a news conference about reopening North Carolina amid the coronavirus pandemic. Click the video player below to watch the news conference:

Cooper announced that he signed an Executive Order that will begin Phase One of reopening North Carolina at 5pm on Friday, May 8th. 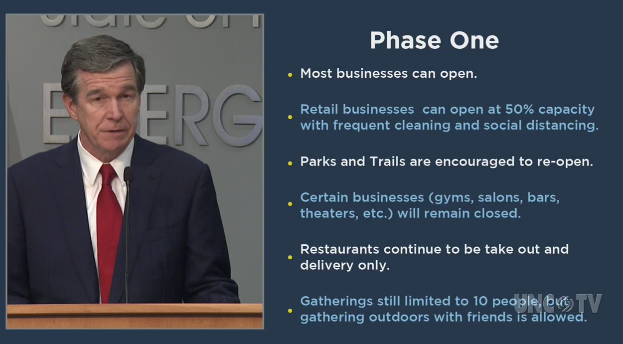 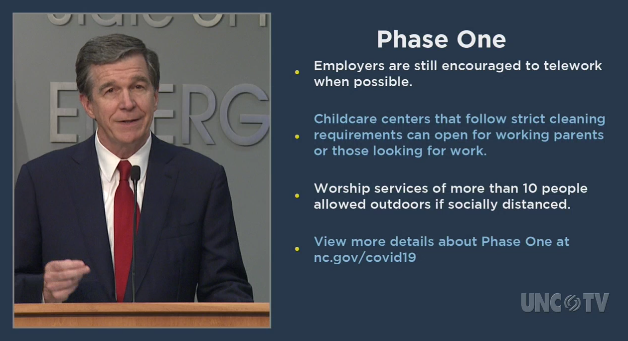 CHARLOTTE, N.C. – As soon as this weekend, you’ll likely be able to shop at malls and other non-essential businesses in North Carolina.

Governor Cooper is expected to lay out specifics in the next couple of days.

“We’re looking to minimize (people being) in close proximity, less than six feet for more than 10 minutes at a time,” she explained.

That 10-minute rule likely rules out restaurants and churches.

But local leaders expect retail outlets will be able to reopen at a similar capacity as grocery stores… five people per one thousand square feet.

Earlier in the day, Governor Cooper signed a $1.5 Billion relief bill that includes money to expand testing, which in turn could help things open back up quicker.

The Governor also says he’s open to certain regions of the state opening up quicker. He says expect two or three weeks before moving to the second phase.

The Governor says this will be a deliberate, data-driver process because once opening begins, he doesn’t want to have to reverse course.

“We’re hoping that we can go and get through these phases, prevent a spike in North Carolina, and keep people safe and to get the economy reignited at the same time,” Cooper said.