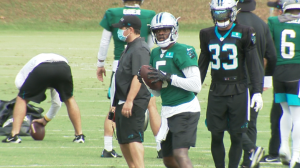 Teddy Bridgewater drops back to pass during the Panthers practice Sunday.

CHARLOTTE, N.C. — For the first time on Sunday the media was allowed to attend the Panthers practice during training camp, and they were immediately welcomed to a new atmosphere and speed.

“It’s so efficient how we can bang out two and a half hours of practice in one and a half,” said Panthers offensive tackle Taylor Moton.

For Rhule, practicing this fast is nothing new, it’s how he’s always operated.

“The practice we’re doing is just kind of how I was raised in football that really just seems natural to me,” said Rhule. “We just want to move efficiently from drill to drill and have great energy, work really hard, and get out of there. We don’t want to be on the field longer than we have to. But we’re going to make sure that while we’re out there, we put great reps on tape.”

Music also played during various portions of the practice.

“I think if it’s a little bit faster at practice, when you get to the game, it feels way, way slower,” Rhule said. “Then, hopefully, you’re in better shape. Hopefully, you can fly around.”

The Panthers will wear full pads during practice on Monday.