RALEIGH, NC (News Release) – The numbers 9-9-9-9 in Monday night’s Carolina Pick 4 drawing added up to a $9.2 million win for lottery players, the most ever won in a single drawing in the game.

The winning numbers are known as “Quads” among players of the Pick 4 game. Quads are some of the most popular combination of numbers played. The odds of matching all four numbers in a Pick 4 drawing are 1 in 10,000. 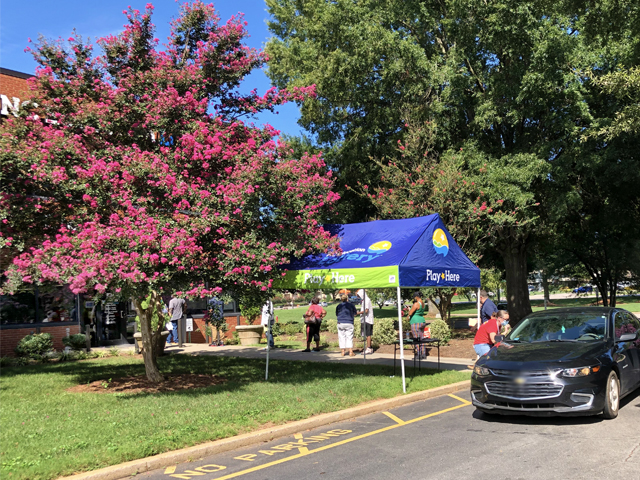 Winners waiting in line to claim their prizes Monday at the N.C. Education Lottery’s Raleigh claim center and a graphic with the logo of the Carolina Pick 4 game. (Photo Credit: NC Lottery)

Lucky winners visited lottery claim centers all across the state to get their prizes on Tuesday. Following social distancing guidelines and safety precautions, they waited in line with their winning ticket in hand to get their checks.

In Raleigh, Pauline Bordes of Bunnlevel left the office smiling with her $5,000 prize. She said she would use the money to pay some bills. “I was a little bit surprised,” she said. “I play, but when it actually came I said, ‘Wow. It happened.’”

Brenda Todd of Durham said she found out her 50-cent ticket won $2,500 when she checked the Pick 4 results Tuesday morning on the lottery’s website. She said she would use some of the money to buy new tires for her car. “It’s a good thing,” Todd said. “It’s very special during these times.”

Lottery officials remind winners that they have 180 days to claim their prizes. Due to the large number of winners and additional COVID-19 safety procedures, players should expect extended waiting times to complete their claims if they choose to visit a regional office on Monday and Tuesday. Players must bring a Photo ID and proof of their Social Security number to complete their claims. Prizes can also be claimed by mail.

Drawings in the Carolina Pick 4 game are held twice a day, at 3 p.m. and at 11:22 p.m. Players can either pick their own numbers or select a Quick Pick by allowing the lottery terminal to generate a set of four numbers for them.