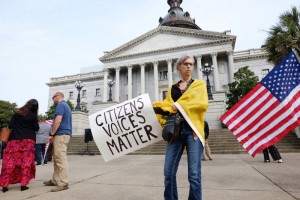 Kim Rulf, of Greenville, South Carolina, attends a protest on the South Carolina Statehouse grounds in Columbia, S.C., Tuesday, Sept. 15, 2020, calling for Gov. Henry McMaster to end the state of emergency issued for the coronavirus pandemic and for lawmakers to remove mask mandates across the state. About 50 people gathered without wearing masks at the Capitol building on the morning the state legislature was set to begin a two-week special session. (AP Photo/Michelle Liu)

But the changes passed by the Republican dominated General Assembly did not include proposals pushed by Democrats including eliminating the requirement that a second person witness and sign the ballot and placing multiple drop boxes for ballots in counties.

The rules are only for the 2020 election and are similar to ones put in place for the statewide primaries in June. The November election should have four to five times as many voters. so lawmakers did give election officials more time before polls close to open absentee ballots and start counting them.

Lawmakers also have agreed to spend money on additional protective equipment for polling places and are discussing bonuses for poll workers.

McMaster signed the bill as soon as it landed on his desk Wednesday, surrounded by both Democratic and Republican lawmakers.