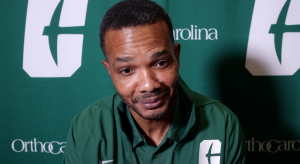 FIRST HALF – Matos, who went 5-for-7 from the field in the half, started his hot shooting first half with the 49ers’ first points on a three from the wing just 20 seconds into the game. For the first eight minutes of the half, Old Dominion led for the majority of the time by a margin between 2-4 points. With the Monarchs leading 21-20 with eight and a half minutes left in the half, the 49ers scored eight straight points taking a 28-21 lead when Shepherd connected on a three off an assist by Matos at the 6:53 mark. The 49ers pushed their first-half lead to nine points three times in the half. Charlotte led 41-33 with just under two minutes left in the half after another three by Matos from the corner. The Monarchs scored the final four points of the half, cutting Charlotte’s lead to 41-37 at halftime.

SECOND HALF –  The Monarchs began the second half by scoring 16 of the first 20 points, taking a 53-45 lead with 13:46 on the clock. With seven minutes on the clock, Charlotte trailed Old Dominion, 61-54; over the next five minutes, Charlotte scored 13 of the next 19 points, tying the score at 67 when Williams knocked down a three from the wing. Young scored eight points during the 49ers scoring run. With the score tied at 68 with just over a minute left in regulation, Jared Garcia scored inside, giving the 49ers the lead. Old Dominion tied the score 20 seconds later. Each team had a chance to win the game in regulation, but they were not able to convert on their final possessions.

OVERTIME – Shepherd scored the first two points in overtime. The two teams exchanged baskets for the majority of overtime. Young scored inside with 1:47 on the clock giving the 49ers a 76-74 lead. However, Old Dominion scored the game’s final four points, including the game-winning basket with two seconds on the clock.

“This one stings a lot,” Charlotte coach Ron Sanchez said. “We fought hard; the energy was there. I wish we would have gotten to the free-throw line a couple more times. The difference tonight was they took 27 free throws, and we took 12. Definitely proud of the fight we brought to the game today.”

Charlotte concludes their home-and-home series with Old Dominion on the road this Saturday, February 13, at 4 p.m.