Federal authorities say 20-year-old Ishmeel Chapman will serve 16 years in prison and three years of supervised release for his involvement in an armed robbery at a Dollar General in April of 2020.

Detectives say Chapman and another suspect entered the Dollar General on April 23rd, 2020 to demand money, while threatening those inside.

Chapman grabbed a customer and forced him to the cash register counter, struck an employee, pointed a firearm at several customers including a one-year-old child, and ordered customers to hand over their purses and wallets during this encounter, according to court documents.

Detectives say Chapman and his accomplice took $510 from the cash register before fleeing the scene.

Police say Chapman pointed his firearm at a customer while leaving and struck them on the shoulder with the gun.

On December 1st, 2020, federal authorities say Chapman plead guilty to robbery of a business affecting interstate commerce and possession and brandishing a firearm during a crime.

Chapman is currently being held in federal custody in the Western District of North Carolina, and police say he will be transferred into custody of the federal Bureau of Prisons when he is designated to a specific facility.

Acting U.S. Attorney William Stetzer thanks the FBI and CMPD for their investigation efforts into this case.

CHARLOTTE, N.C. — A suspect in an armed robbery of a Dollar General in east Charlotte has been charged after a vehicle pursuit, according to CMPD. Police are still searching for the second suspect in the case.

On Thursday, April 23, around 2:30 p.m., officers responded to the store on East W.T. Harris Boulevard after reports of the robbery. Upon arrival, officers learned that two armed suspects entered the business, physically assaulted an employee, and took property belonging to the business, police say.

The suspects then fled the scene in a black passenger vehicle. CMPD was able to locate the vehicle and officers were directed to its location where they attempted to conduct a traffic stop but the driver refused to stop police say and a car chase began.

The pursuit ended when the suspect vehicle caused a single-vehicle collision on Kimmerly Glen Lane. According to CMPD, 19-year-old Ishmeel Chapman, one of the occupants of the vehicle, attempted to flee on foot but was quickly arrested.  No other vehicles were involved in the collision and no one was injured. 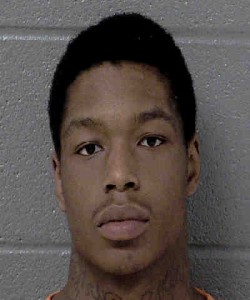 CMPD Detectives are requesting the public’s assistance in identifying the second suspect in this case.  The second suspect is described as a black male with dreadlocks.  He was last seen wearing a red and black spiderman sweater and a black hat.

Anyone with information about this case is asked to call 911, or leave that information anonymously by contacting Crime Stoppers at 704-334-1600 or http://charlottecrimestoppers.com/.