Panthers Cut Roster Down To 53 Players

The Panthers make several moves, including waiving backup quarterback Will Grier, to get their roster down to 53 players. 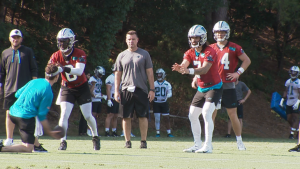 CHARLOTTE – The Panthers make several moves, including waiving backup quarterback Will Grier, to get their roster down to 53 players.

It’s not personal, it’s business: Cut day in the NFL.

About 15 minutes before Tuesday’s 4 p.m. deadline, the Panthers trimmed their roster down to the 53-man limit. Their final move was waiving running back Rodney Smith, which leaves just two RBs on the current roster: Christian McCaffrey and Chuba Hubbard.

The team made several moves earlier on Tuesday, including waiving running back Reggie Bonnafon with injury designation.

The Panthers also waived Charlotte native and former third round draft pick Will Grier, who was competing with P.J. Walker to be the backup quarterback. Instead of keeping three QBs on the roster like they did last season, head coach Matt Rhule says they’ll likely stick with just two, but that wasn’t set in stone.

Rhule says if the Panthers had to play today Walker would be Sam Darnold’s backup, but was hesitant, adding that things could change quickly. The Panthers head coach also left the door open when it came to bringing in a veteran quarterback to backup Darnold this season.