The Blue Ridge Mountains draw thousands of visitors each Fall season to take in the fall foliage. More than 120 species of trees help paint the vivid display with oranges, reds, yellows, and plums marking the end of summer and start of cooler weather. But, it’s not just a day on the calendar that brings on this change. Weather plays a big role in when the leaves change and how vivid the colors will be each Autumn.

Leaves are green during the spring and summer months due to chlorophyll production within the leaf. This molecule absorbs sunlight and helps turn water and carbon dioxide into nutrients for plants and trees. When chlorophyll production is high from long days of sunlight, it blocks out other pigments found in leaves and reflects green. As nights become longer, chlorophyll production slows and trees begin the process of preparing for winter by closing off the veins that transport nutrients to and from the leaves. This, in turn, allows other pigments in the leaves to become more visible which is why we see a change in color during the fall.

Colors become more vivid and begin to change at different times because of temperature, rainfall, and wind. All trees contain carotenoids which give off yellow, brown, and orange hues and flavonoids that give off yellow hues. Their pigment is always present in leaves but masked by chlorophyll. The red and plum hues come from anthocyanine and are only found in certain trees and only released under certain conditions. Trees produce more sugar during warm and sunny days. When it begins to get cooler, trees release anthocyanine to pull in as much sugar as possible to prepare for winter. The more sugar that’s built up, the more vivid red we see. If it’s been particularly wet or cool during the spring or early summer, those reds and plums won’t come through.

Rainfall during the growing season impacts the timing and vividness of the color we see. Drought impacts soil moisture and delays the start of the leaves changing color and can shorten the season dramatically. Too much rain in late summer or early fall could cause the leaves to fall early and keeps the leaves colors from becoming more vibrant.

You and your kids can learn more information on the science behind why the leaves change color through engaging lessons with our partner WeatherStem.

Temperatures have been near average this year, but we had a late burst of warmth through August and September has kept evenings warmer than average – especially for the higher elevations. This has delayed the color change a few days, but the leaves should be on track to show off intense hues, as long as we don’t see any strong storms that would bring strong winds. Closer to the Piedmont, abnormally dry and slight drought conditions returned this year which could also delay the change in colors. This could also mean we won’t see as vivid of a color change, but the season shouldn’t be a total loss.

The higher elevations above 5000′ will reach their peak first during late September to early October. Peak fall foliage south of I-85 will be from late October to early November. Here is a week-by-week forecast from www.smokymountains.com. 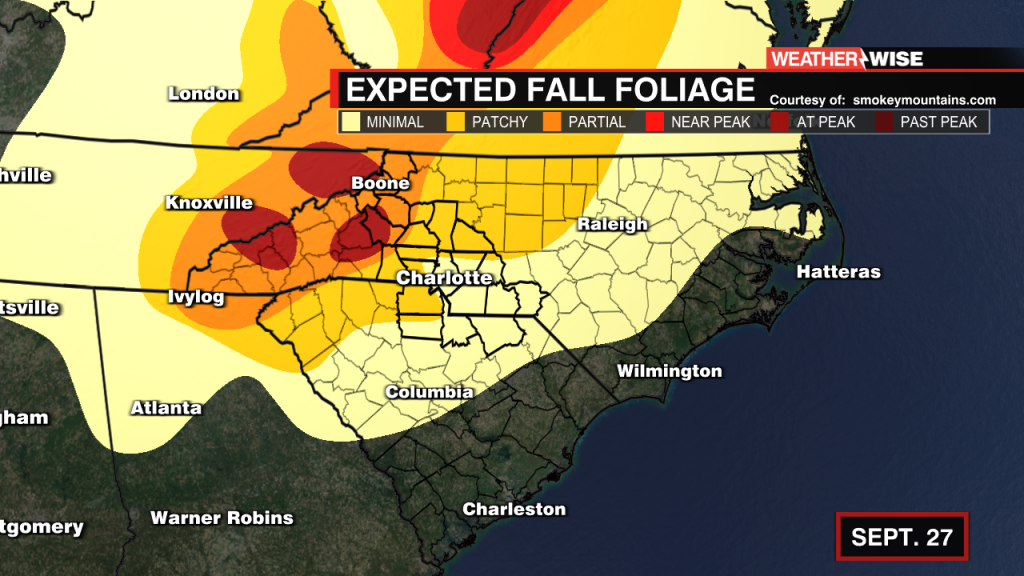 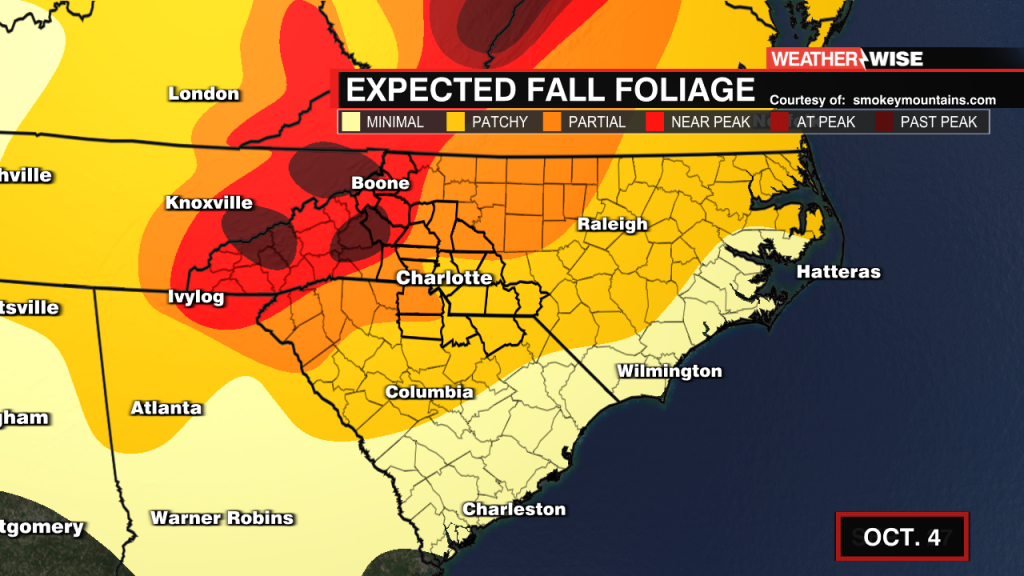 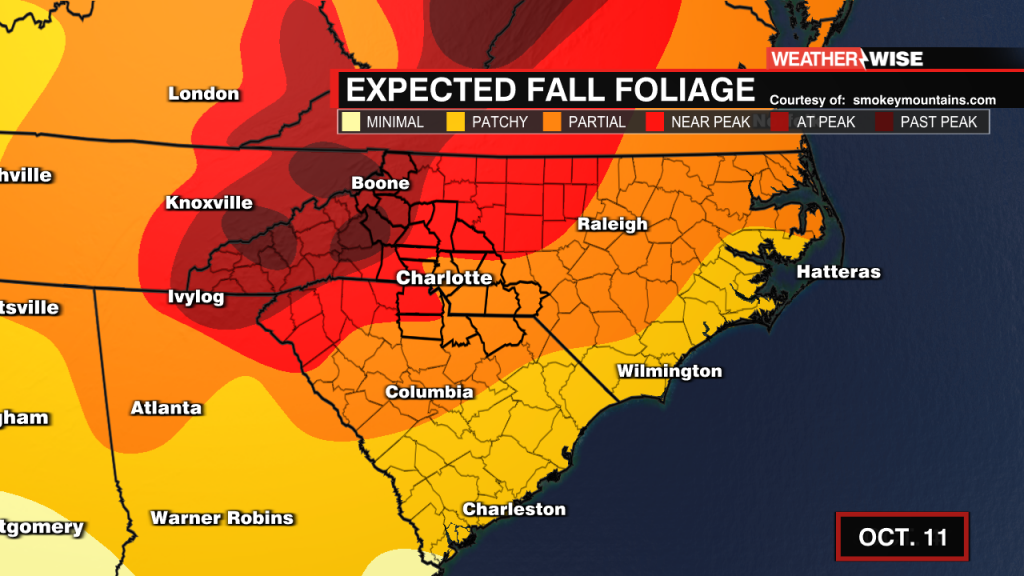 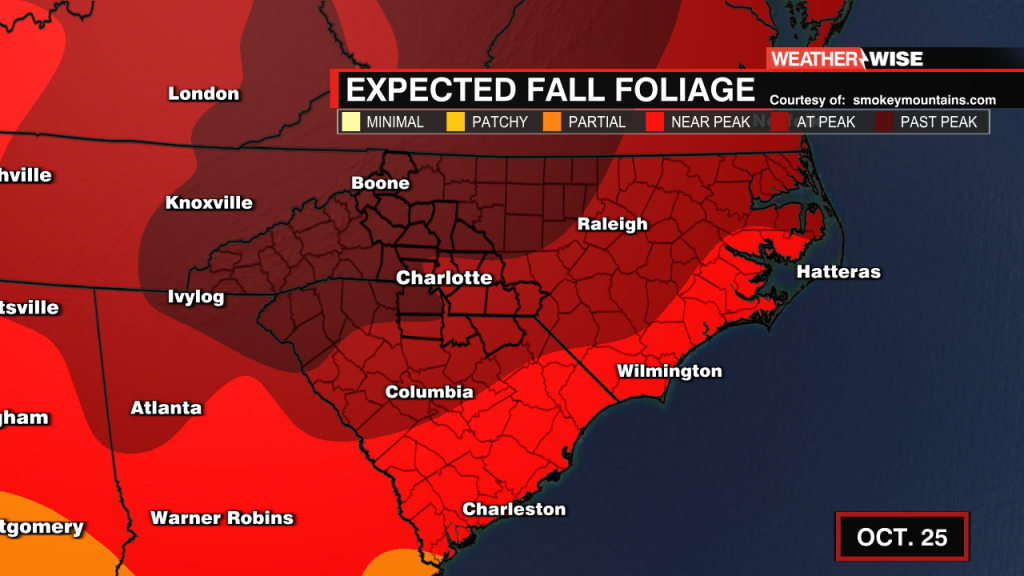 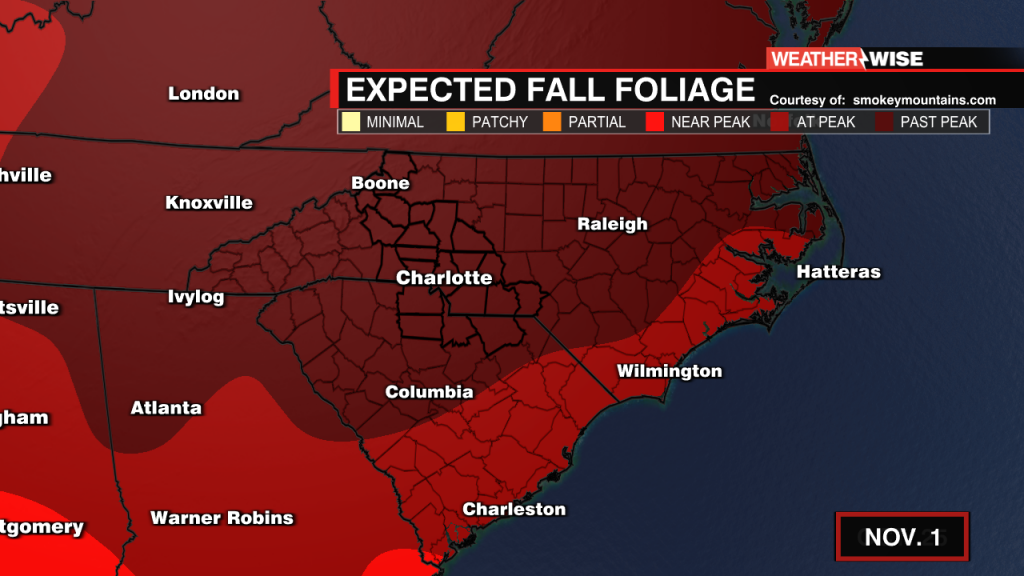 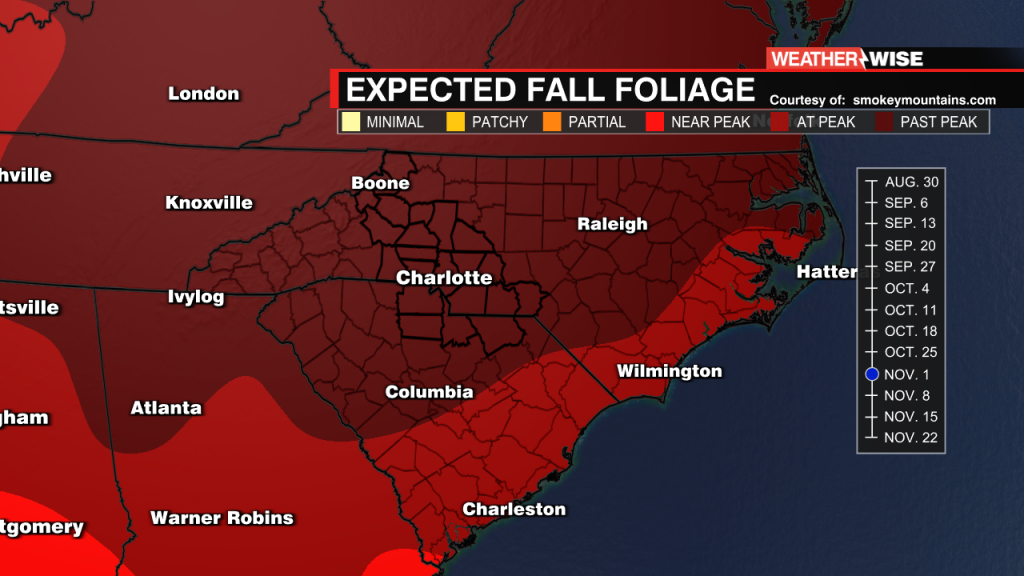 We want to see your best Fall foliage photos! Share your photos with us by sending an email to photos@wccbcharlotte.com or directly through the WCCB Weather App.