After Being Woken Up, Man Tries To Flee From Deputies In Burke County

MORGANTON, N.C. — A 43-year-old Lenoir man has been arrested and charged following a police chase in Burke County on Sunday.

Deputies responded to a Marathon Convenience store on Lenoir Road in Morganton around 7:15 a.m.

The first deputy at the scene was told by the store clerk that two people were passed out in a car that was running at the diesel fuel pump.

Deputies say they saw a butane torch, a glass pipe, and naloxone in the suspect car.

When the woman and man inside were awakened, police say the driver cursed the deputy and drove away toward Lenoir.

Deputies then initiated their blue lights and sirens and pursued the suspect vehicle on NC 18- Highway US 64 toward Lenoir.

Before the driver reached speeds of over 100 mph, deputies say he pulled over to the right shoulder of the road at Chesterfield Wood Products and let the woman riding passenger out of the car.

After letting her go, police say the driver reached a speed of over 130 mph when he crossed into Caldwell County.

Officers then placed stop sticks on Clarks Chapel Road in an attempt to stop the driver.

Police say the driver’s left front tire hit the stop sticks shortly after, blowing out the tire, which came off the rim when the driver turned onto Connelly Springs Road.

Deputies were then able to take the driver, Brandon Earp, into custody without further incident. 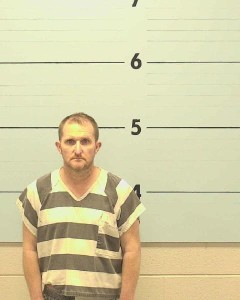 A search of the car lead to the seizure of a small amount of white powder, methamphetamine, and a glass pipe that were turned over to Burke County Narcotics deputies, according to a news release.

Deputies then arrested and charged Earp with Fleeing to Elude Arrest with Motor Vehicle, Resisting Public Officer, Reckless Driving to Endanger, and Speeding for his involvement in the incident.