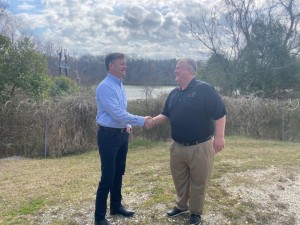 CHARLOTTE, N.C. — The Olde Mecklenburg Brewery closed on the sale of a property that is set to become its third restaurant and brewery in the Charlotte metro region on Thursday.

Officials say construction is expected to begin in spring.

“We’re excited about the opportunity to be a part of the Mount Holly community,” says OMB’s founder John Marrino. “It’s a great town and a beautiful location with tremendous potential for future expansion.”

The new Mount Holly location will feature 7,000 square foot two-level restaurant true to OMB’s cozy feel, and an expansive Biergarten like its flagship location in Charlotte’s South End neighborhood, according to a news release.

Officials say visitors will have a view overlooking the Catawba River at Dutchman’s Creek.

“This announcement is exciting news for our city,” commented Mayor Bryan Hough. “This project will bring a lot of people to Mount Holly. Being out with people and enjoying one another is important to our community.”

OMB hopes to officially open the new location by summer of 2023.

City Manager Miles Braswell said, “This transformative project is part of our commitment to the economic development of Mount Holly. The arrival of OMB is an indication that we are more and more becoming a destination for businesses, families, and visitors.”