RALEIGH, N.C. (AP) — Authorities in North Carolina charged a man with murder Thursday in the fatal shooting of a sheriff’s deputy last week. 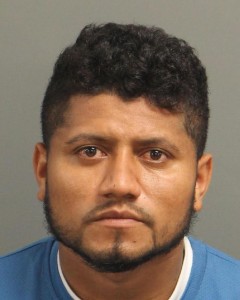 Lt. Walter Adams said the investigation is ongoing and additional arrests are expected. He urged anyone with information about the shooting to call the sheriff’s office.

Baker identified Marin-Sotelo as “one of the suspects” authorities believe were involved in Byrd’s killing. The sheriff’s office did provide any biographical information about Marin-Sotelo and did not take any questions at the news conference, citing the active nature of the investigation.

Byrd, 48, was a K-9 officer who had been with the sheriff’s office for 13 years. Baker said Byrd was killed after stopping along a dark stretch of road late at night.

Sherriff’s Office spokesman Eric Curry said earlier that evening, Byrd had responded to a domestic call less than a mile away and then entered his notes into the system. When Byrd didn’t respond to several attempts to check in, another deputy was sent to check and found Byrd shot outside his vehicle with his K-9 still inside the vehicle, Curry said.

WAKE CO., N.C. — The Wake County Sheriff’s Office is grieving after one of their own was fatally shot in the line of duty early Friday morning.

It is with sadness to share that a @WakeSheriff deputy was fatally shot while in the line duty earlier this morning. Please pray for the deputy’s family and this agency.

Authorities say the shooting occurred in the eastern part of the county near a gas station on Auburn Knightdale Road and Batter Bridge Road.

Several agencies responded to the scene.

Authorities have not yet named the officer involved.

Tragically a Wake County Deputy has been shot and killed last night. I have talked with Sheriff Baker and the state is providing resources to help capture those responsible. – RC

“Early this morning, a Wake County Deputy was killed in the line of duty. This comes only 10 days after the murder of Wayne County Deputy Sgt. Matthew Fishman. Four other North Carolina deputies have been shot doing their jobs in the last three weeks alone, but are thankfully still alive.

“I am profoundly troubled by the recent spate of violence against law enforcement officers. Officers put their lives on the line to protect our communities – we must do everything in our power to keep them safe. I thank the many public-spirited officers who are serving and protecting the people of North Carolina all over the state.

“I send my deepest condolences to the families, friends, and colleagues of those whose lives have been lost and my best wishes to those recovering. You are in our hearts.”

The investigation into this incident is active and ongoing.