Salisbury Police have charged a man in connection to a shooting over the weekend at Livingstone College. Authorities identified 21-year-old Talib Kelly as one of the shooters during a news conference on Tuesday. 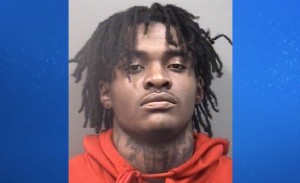 Kelly is not a student of the school and police say once he is released from the hospital he will be charged with attempted first-degree murder, discharging a firearm on educational property and possession of a firearm by a felon.

Two other people who were injured in the shooting are expected to be okay. The victims names have not been released at this time.

Anyone with information is asked to contact the Salisbury Police Department.

SALISBURY, N.C. — Police say that two people, who were not students, were shot late Saturday night at Livingstone College. There is no active threat to the campus.

Officers arrived at the campus around 11 p.m. on October 15th and found two people shot during the college’s homecoming concert.

The shooter was not a student and, despite early reports, it does not appear they were part of an altercation going on at the same time.

Two Livingstone students were injured while running away from the incident.

This is still an ongoing investigation. Anyone with information is asked to call Lt. Crews at (704) 638-5333 or send a private message to the Salisbury Police Department Facebook or Twitter pages at @SalisburyNCPD.