On Sale? Belk Could Be Bought for Billions 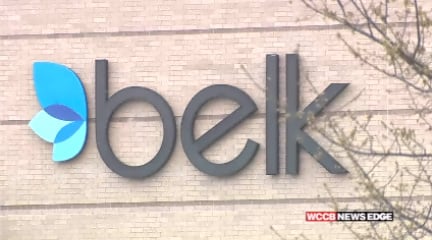 CHARLOTTE, NC — First Harris Teeter. Then Family Dollar. Now it looks like Belk could be the next locally owned big business to change hands.

The company has hired Goldman Sachs to explore the options, and a potential deal may be too much to pass up.

Charlotte-based Belk operates 300 stores in 16 southern states, generating more than $4 billion in sales last year. But Belk’s net income was down from the previous year by almost 8 percent.
“Large department stores are suffering,” said Olivia Oran. “I think that they’re under a lot of pressure from the online retailers. Mall traffic is down, and continues to be down.”
Oran broke the story for Reuters.
A Belk spokesperson confirmed for WCCB Charlotte what Oran reported: that it has hired investment bank Goldman Sachs to help evaluate strategic alternatives, including a possible sale.
Macy’s, Nordstrom and Canadian company Hudson’s Bay could be potential buyers.
“You may want to look at the large, national department stores that are looking for a footprint in the southeast region,” said Oran. “You know Macy’s is definitely a possible buyer. When we put out the story, Macy’s stock jumped about 4 percent.”
Belk is entering a five-year strategic planning process in a rapidly changing industry.
“We have an obligation to consider whether there are alternatives to our current plans that would provide a better return for our stockholders,” said a statement from Belk, Inc. sent to WCCB Charlotte.
Belk has a long history in the Charlotte area.
William Henry Belk opened the first store on Main Street in Monroe in 1888, and the family business took off from there.
As to why the Belk family is looking to sell now…
“You know it’s a third generation company,” said Oran. “And I don’t know why they’re selling. That is still a question to me.”
Belk says it plans to conclude its analysis in the next several months.