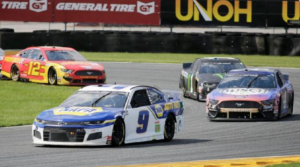 DAYTONA BEACH, FL — Make it three in a row on the road for Chase Elliott.

The 24-year-old Elliott also won on road courses at Charlotte and at Watkins Glen last year. He got a bigger challenge than many expected down the stretch in his latest roadie.

Elliott, Hamlin and Martin Truex Jr. had the cars to beat. Truex’s chances took a huge hit near the end of the second segment. He was caught speeding on pit road and forced to start the last stanza at the back of the pack.

Making up that kind of ground on a 14-turn, 3.61-mile road course was a nearly impossible tough task, especially considering Elliott was turning mistake-free laps at the front of the field.

Kyle Busch had the best shot at catching Elliott, but the defending series champion had rear brake issues with 17 laps to go and was forced to the garage for a lengthy repair.

When everyone else cycled through final pit stops, Elliott had a six-second advantage over Hamlin. He pushed that to 10 with 10 laps to go.

Busch returned to the track and caused a caution that helped his Joe Gibbs Racing teammates, Hamlin and Truex. Hamlin gave Elliott all he could handle on the final lap, but didn’t do anything more.