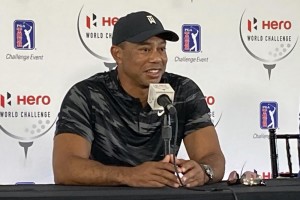 NASSAU, Bahamas — Tiger Woods doesn’t have a lot of answers about his past or his future.

He says he has no recollection of the February car crash in the Los Angeles suburbs that shattered his right leg.

As for the golf, the 15-time major champion says he hasn’t reached a point where he can even decide whether he wants to return.

If anything, he says he won’t be playing a full schedule again.

Woods on Tuesday had his first media availability since the February accident.

He is in the Bahamas this week to host his Hero World Challenge.