Police have additionally charged Monterius Johnson, 23, for the murder of Tahajie Howard.

Johnson was arrested on an unrelated case Thursday, and after an interview with detectives, Johnson was charged with 1st Degree Murder and Conspiracy to Commit Murder in this case.

Detectives say five men are now being held responsible for the fatal shooting of 21-year-old Howard in west Charlotte on October 17th.

The Charlotte-Mecklenburg Police Department has charged three men for the fatal shooting of a 21-year-old that happened in west Charlotte on Oct. 17, before the victim was later found dead in Uptown Charlotte.

Through an investigation, police identified 21-year-old Jamel Robinson, 20-year-old Takyi Wylie, 24-year-old Gervaris Culp, and 33-year-old Pierre McClure as suspects in the homicide case of Tahajie Howard and warrants were issued for their arrests.

Detectives located and arrested all four suspects without incident Thursday and Friday.

Following their interview with detectives, the suspects were transferred to the custody of the Mecklenburg County Sheriff’s Office and each charged with 1st degree murder and conspiracy to commit murder, according to CMPD. 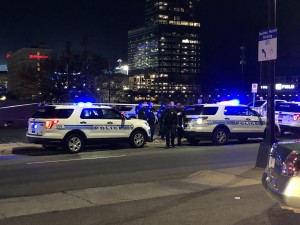 CHARLOTTE, N.C. — The Charlotte-Mecklenburg Police Department is investigating a homicide after a 21-year-old man was shot in west Charlotte before he was found dead in Uptown Charlotte Sunday evening.

Police responded around 7:45 p.m. to Remount Round, near West Boulevard, after receiving a call for service about discharging a firearm. Soon after the first call for service officers were dispatched to an assault with a deadly weapon call for service on South Mint Street, nearby West 4th Street and the Truist Field.

Upon arrival, officers found a man suffering from a gunshot wound. The victim, identified as Tahajie Howard, was pronounced dead on scene by Medic.

The police department determined that Howard was shot on Remount Road in west Charlotte.