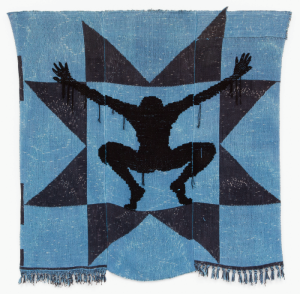 Brackens is best known for his weavings that explore narratives about queerness, masculinity, and the Black experience in the United States, according to a news release.

Officials say his work incorporates elements of West-African weaving, American quilting, and European tapestry-making, as well as histories associated with the craft.

Originally curated by Lauren R. O’Connell for the Scottsdale Museum of Contemporary Art, officials say The Mint Museum iteration installs the SMoCA exhibition alongside works from The Mint Museum’s collection of quilts and weavings, many of which are on view for the first time.

Officials say Ark of Bulrushes will be on display from July 16th through December 11th, 2022 at Mint Museum Randolph.

In Ark of Bulrushes, officials say colorful weavings are encoded with patterns, constellations, and Black figures to form a mythology that combines past stories about liberation with current narratives of freedom and remediation.

“I really started to think about how I could employ baskets as a tool for self-liberation. For me the question was: Could you make a basket big enough to float away, and is this something that one could do in a clandestine manner or in plain sight? I want the baskets to make some of these myths feel possible, that these aren’t just stories we tell ourselves, but that there is possibility through making, through craft, to actualize these things,” Brackens says.

In the performative photography, Brackens brings the baskets back into nature.

“It speaks to how folks have been dispossessed from nature. I think there is so much power in it and so much peace,” he says.

Officials say Brackens and O’Connell worked together with the museum’s Chief Curator and Curator of Contemporary Art Jen Sudul Edwards, PhD, and Senior Curator of Craft, Design, and Fashion Annie Carlano to expand the original SMoCA version with related objects from the Mint’s collection of quilts, weavings, and Native American baskets.

“The sensation of feeling lost and the yearning for guidance — physically, spiritually, emotionally, historically — is a state of existence humans have felt for as long as they have wandered the Earth, and Diedrick Brackens gives us an entirely new way to consider this experience through his poignant, potent imagery that Lauren O’Connell has assembled into this powerful constellation of works,” Sudul Edwards says.

Contemporary regional artists who have works in the exhibition, include Charlotte-based artists Renee Cloud, Katrina Sanchez, and Andrea Vail, along with Edwina Bringle of Penland, North Carolina, Andrea Donnelly of Richmond, Virginia, and Martha Clippinger and Silvia Heyden of Durham, North Carolina, according to a news release.

What The Tech: Smishing Attacks

8PM: Walker "They Started It"