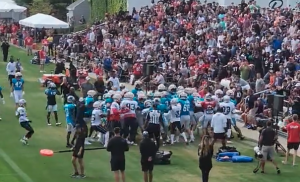 FOXBORO, MA – (AP) A day after a pair of fights resulted in five players being kicked out of the first joint practice between the Panthers and Patriots, two more incidents, including one in which a female fan was struck after a scrum spilled into the spectator area, nearly brought an end to Wednesday’s practice session.

The first dust-up occurred during a live kickoff return drill after Panthers safety Kenny Robinson, one of the players ejected in Tuesday’s tussles, laid a big hit on Patriots receiver Kristian Wilkerson and stood over him, taunting him. Several of Wilkerson’s teammates took issue with it and it led to some brief pushing and shoving. A second scrum after a sideline hit on Christian McCaffrey struck a fan as it spilled into the bleachers.

Football fan @AWLSabermetrics caught the fight on video and posted the video to Twitter.

O yea we got something going here pic.twitter.com/DQvgP01Yp5