The ingredients are there for a significant severe weather event late on Sunday. 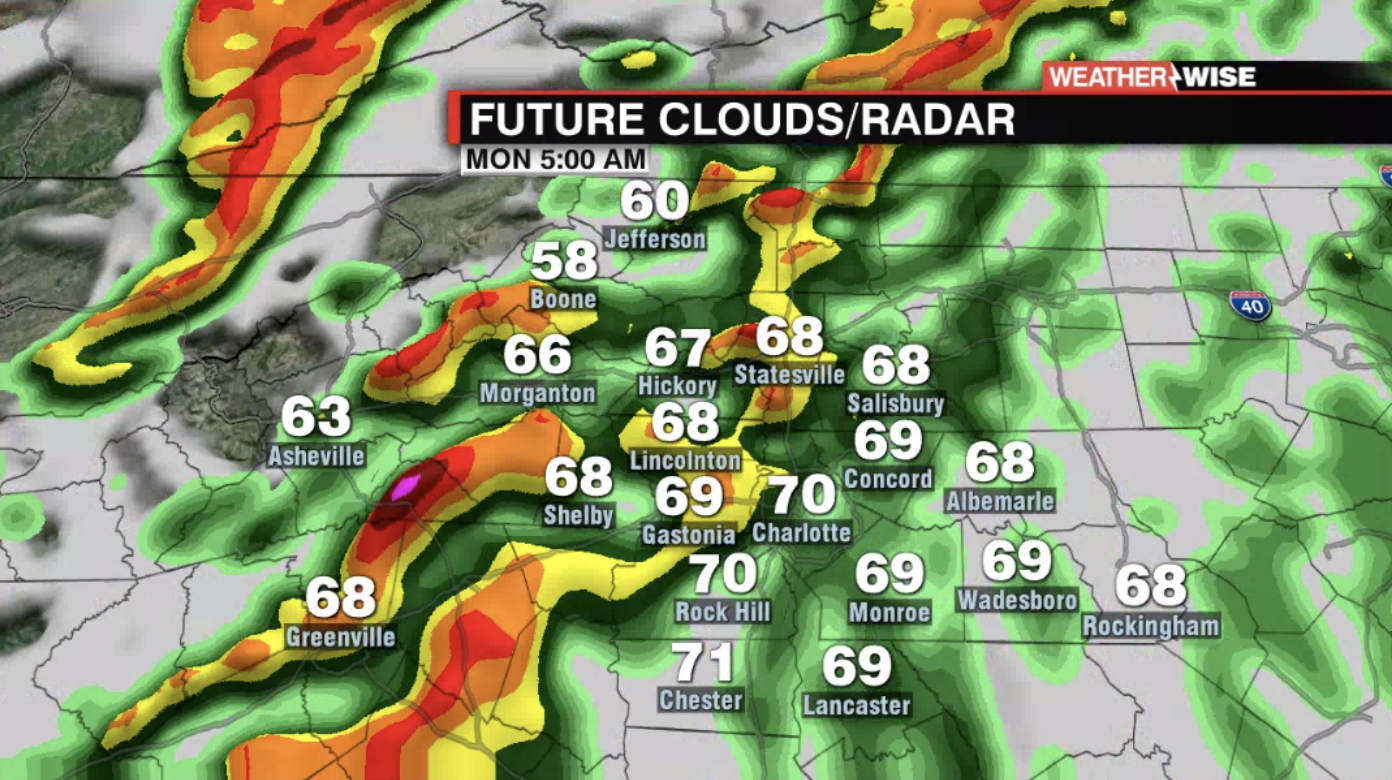 April in the Carolinas is known for its beautiful sunny days and gradual warm-up in temperatures, but it’s also infamous for severe weather. After a beautiful start to the weekend, things will be changing quickly as we head into the third week of the month. 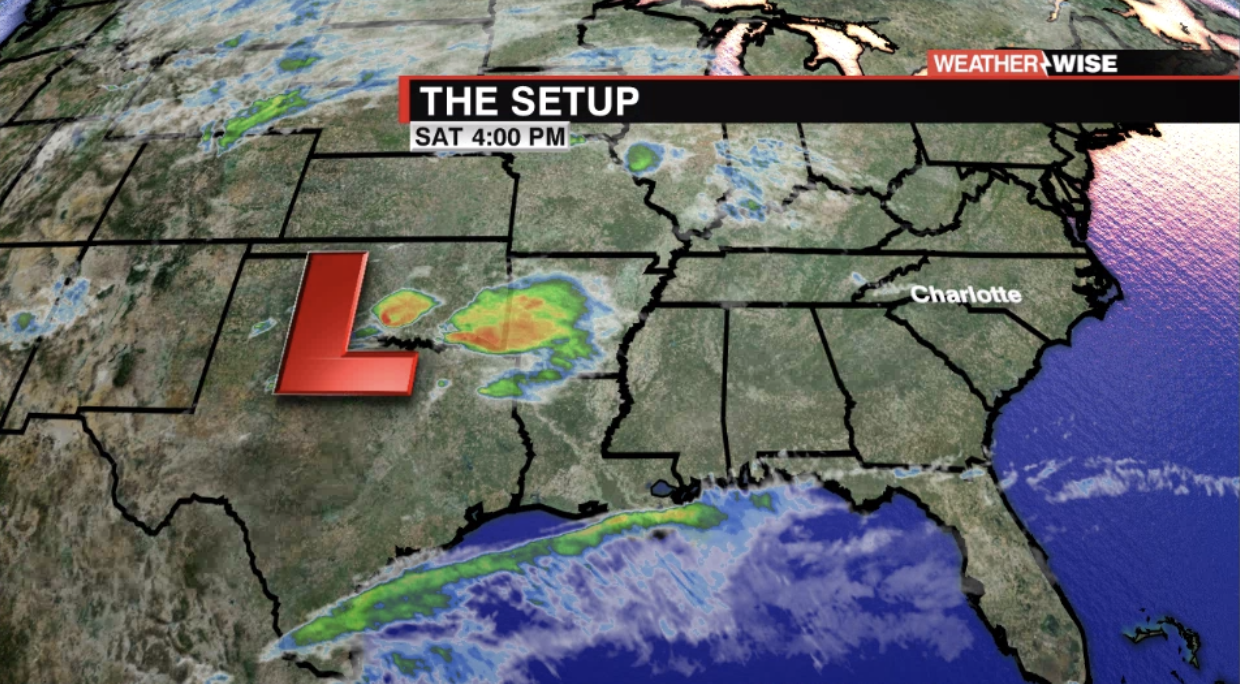 An impressive area of low pressure is currently developing over the Southern Plains and will trek northeastward over the coming days. This system will take full advantage of impressive amounts of moisture and instability, further strengthening any storms that are produced. An intense jet stream (strong winds about 6-8 miles up in the air), will also fuel this storm system as it develops. To make matters worse, impressive southerly winds will only serve to increase instability and moisture from the Gulf, setting up a strong potential for severe storms across the South this Easter weekend. 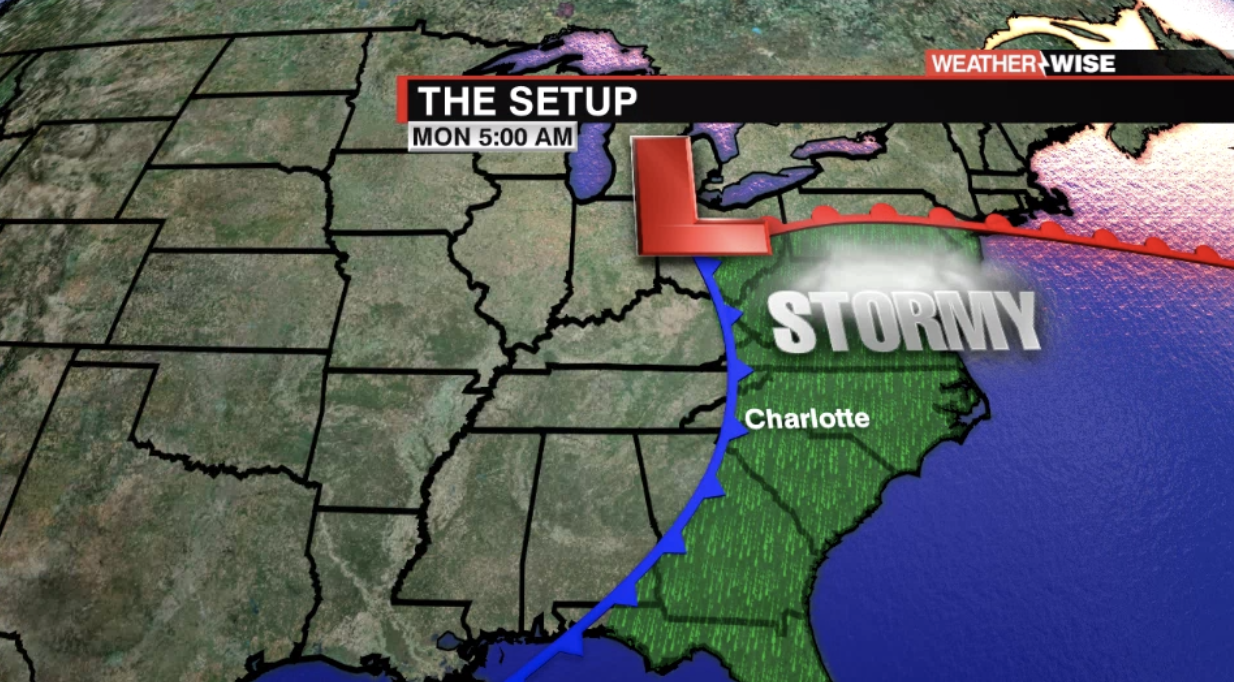 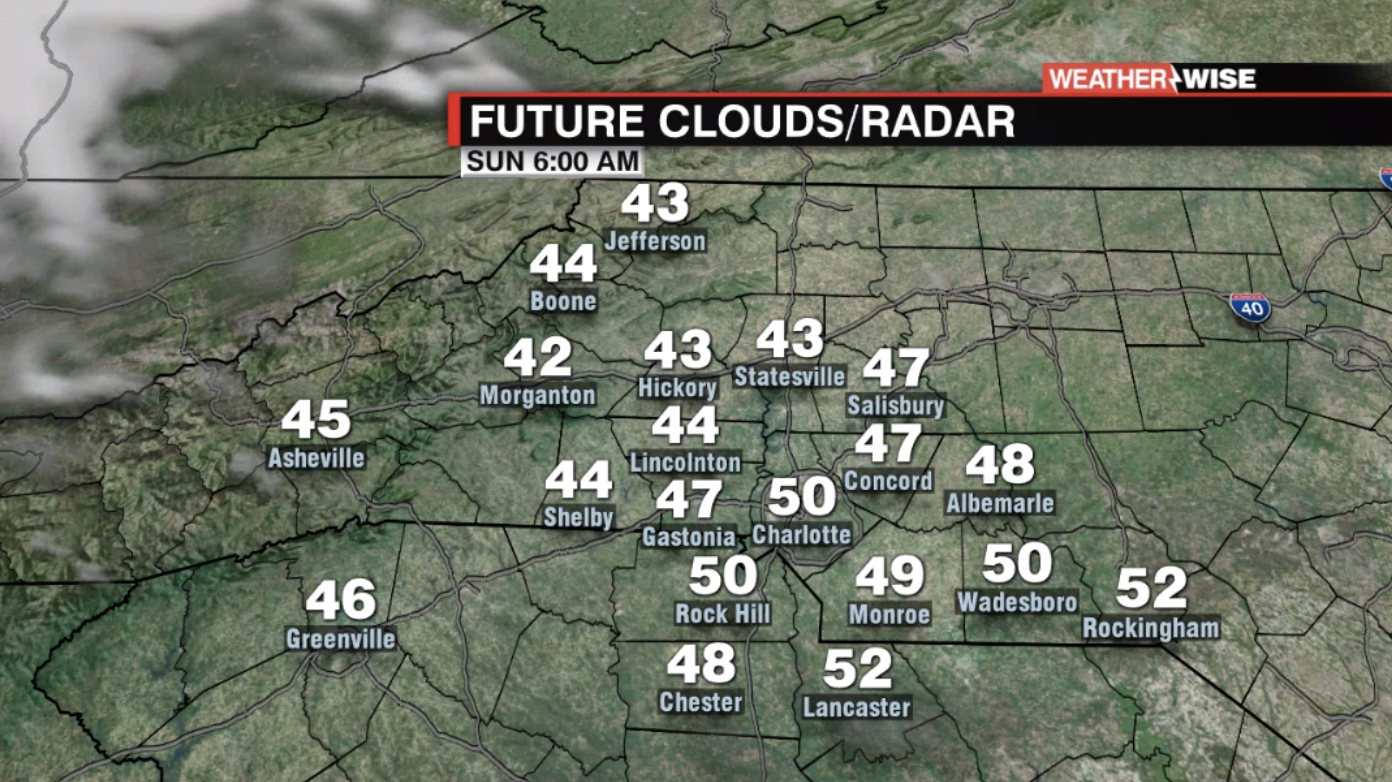 Expect to wake up tomorrow under mostly sunny skies, although you will notice an increase in humidity. Clouds will begin to roll into the western Carolinas in the later morning hours, before becoming completely cloudy by the afternoon. Rain should start in the High Country by 12:00 PM, with the Foothills and Piedmont following suit quickly after. Rain will be heavy at times, especially just before sunset. Between sunset and midnight, there may be a bit of a lull in the action, especially east of the Charlotte area. The High Country will likely get no such solace, however, as heavy rain is expected to continue into the overnight hours there. 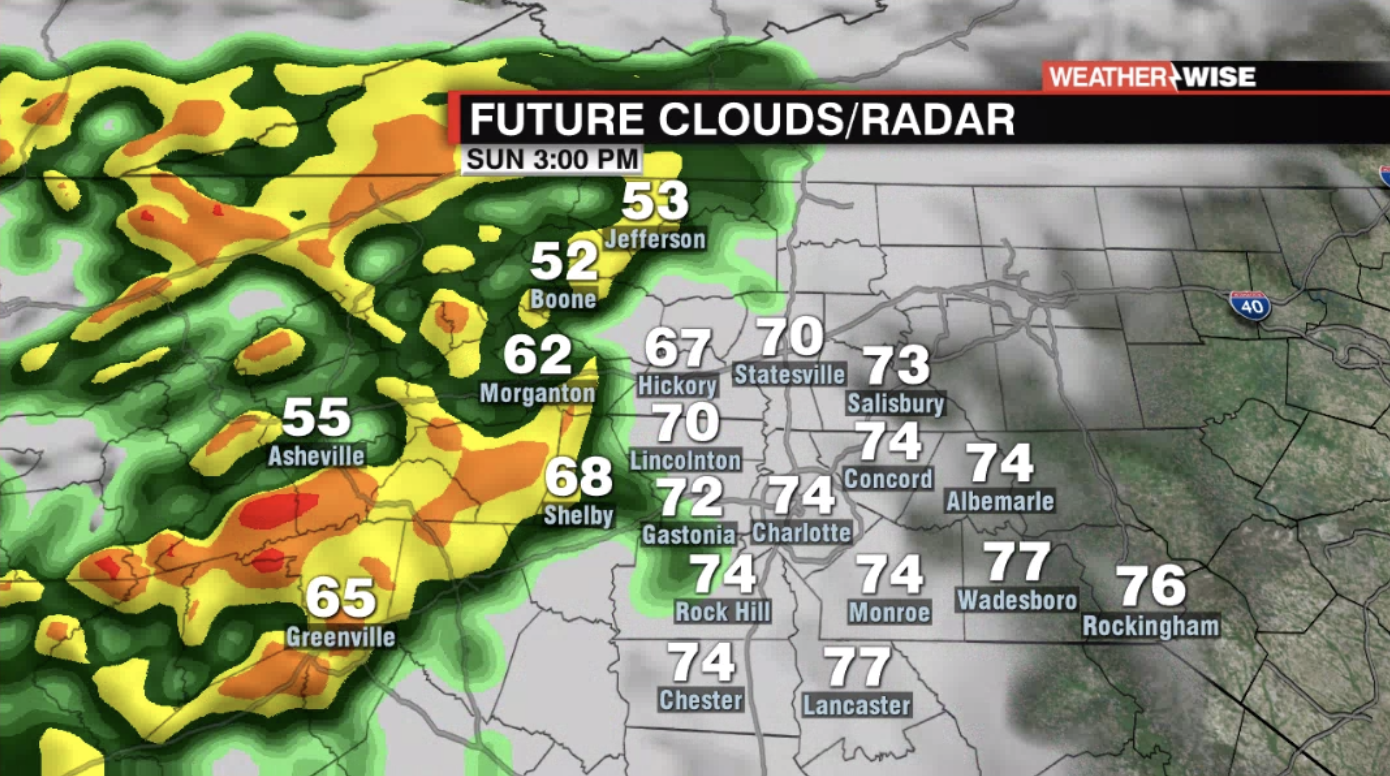 The real severe weather event will occur around midnight Sunday into Monday. Significant helicity (a measure of rotation in the updrafts of storms) will move in around this timeframe, suggesting that any storms that roll in overnight will have some sort of rotation along with them. The final round will sweep through in the form of a squall line around sunrise Monday morning. Behind the line, a few more thunderstorms may develop in the afternoon, but by this point, the worst will be over. A noticeable cooldown will come in Monday night. 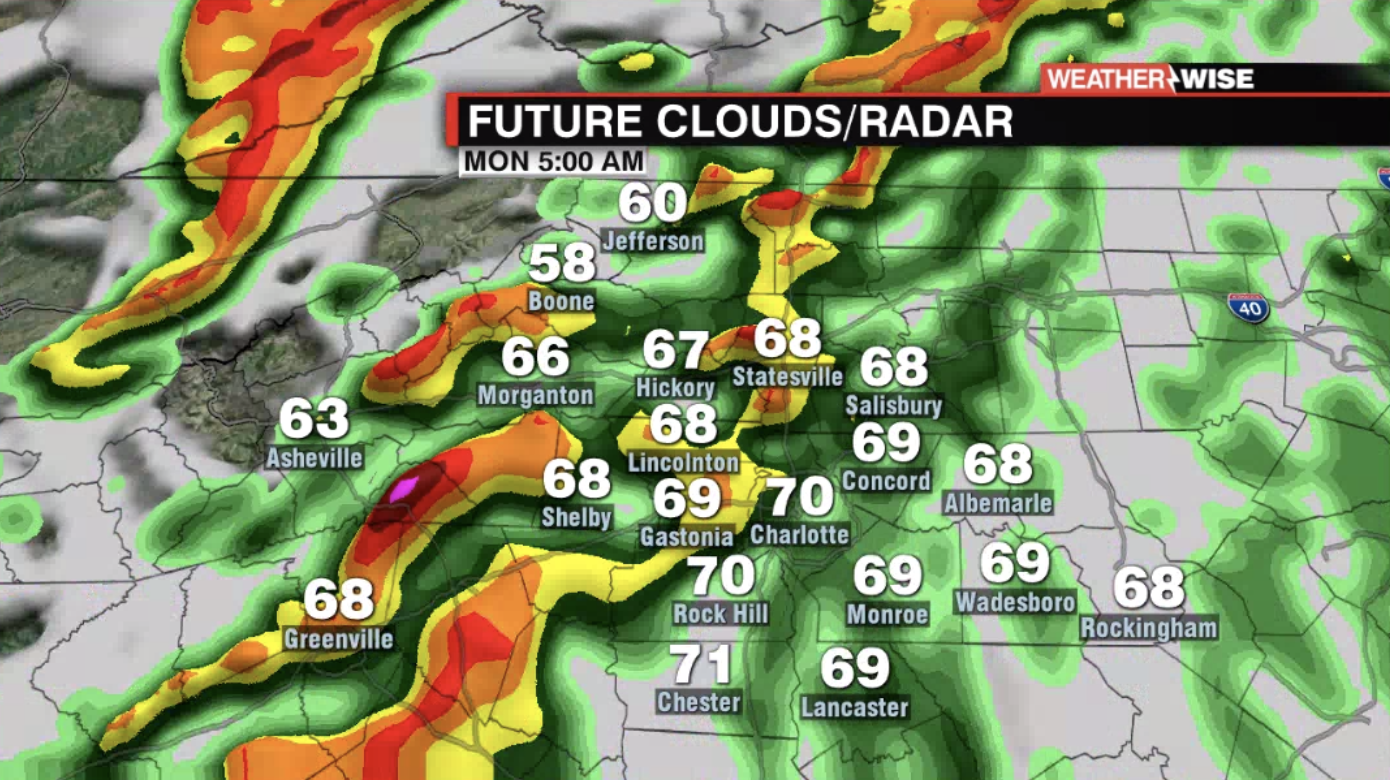 The main threats of this system in the Carolinas will likely be damaging straight-line winds and torrential rainfall. Rain totals could be upwards of a half-foot in some spots in the High Country. Virtually the entire viewing area should see upwards of an inch of rain before this event clears out Monday afternoon. Flash flooding will be a virtual guarantee for the High Country and Foothills, and for some portions of the Piedmont. The heaviest rain will likely come in the form of a squall line early Monday morning for the Charlotte area, although some individual cells could dump locally heavy rain. 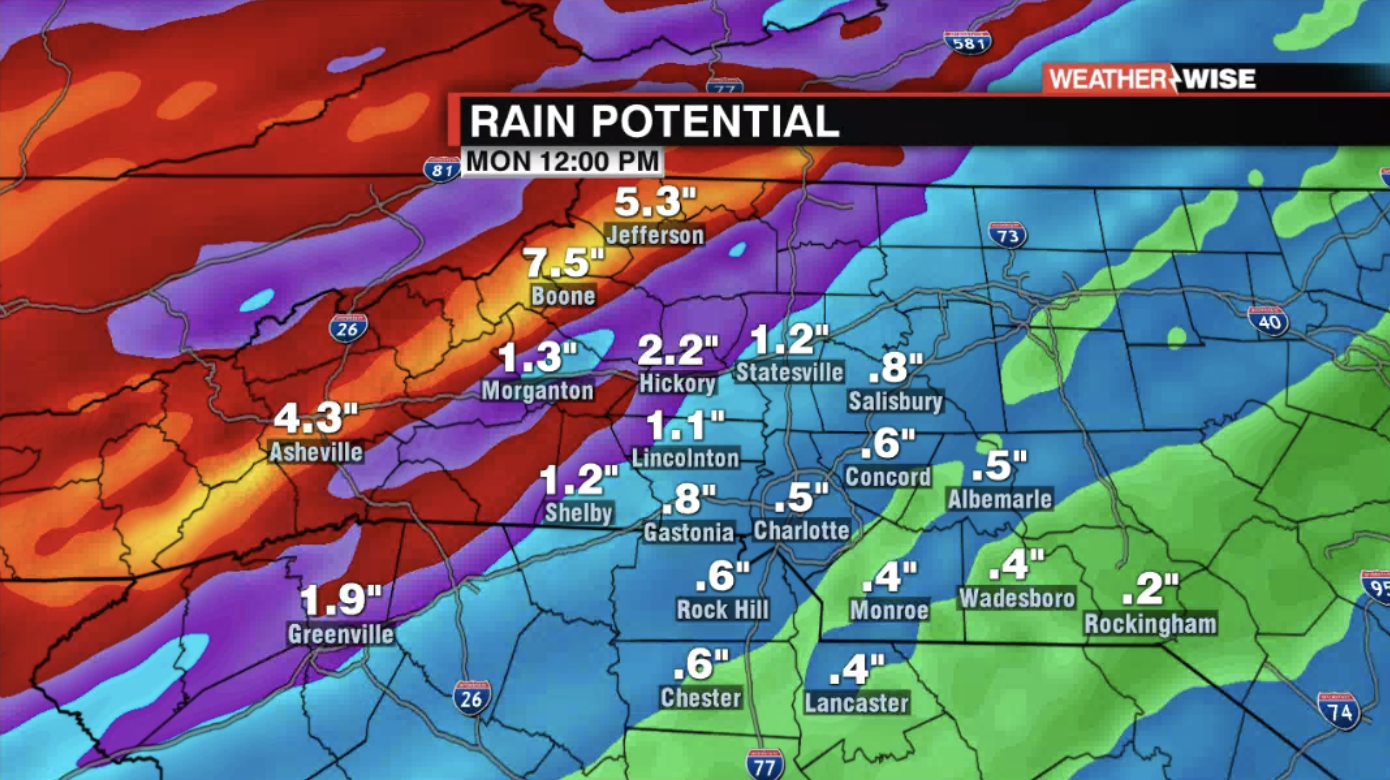 Sustained winds approaching tropical storm force (39+ mph) will roar across the High Country for much of this event. Gusts could even reach hurricane (74+ mph) force in some isolated strong cells across the WCCB Charlotte viewing area. The major wind event will come along with the squall line that moves through Monday morning, where winds could easily top 50 mph in the Piedmont. 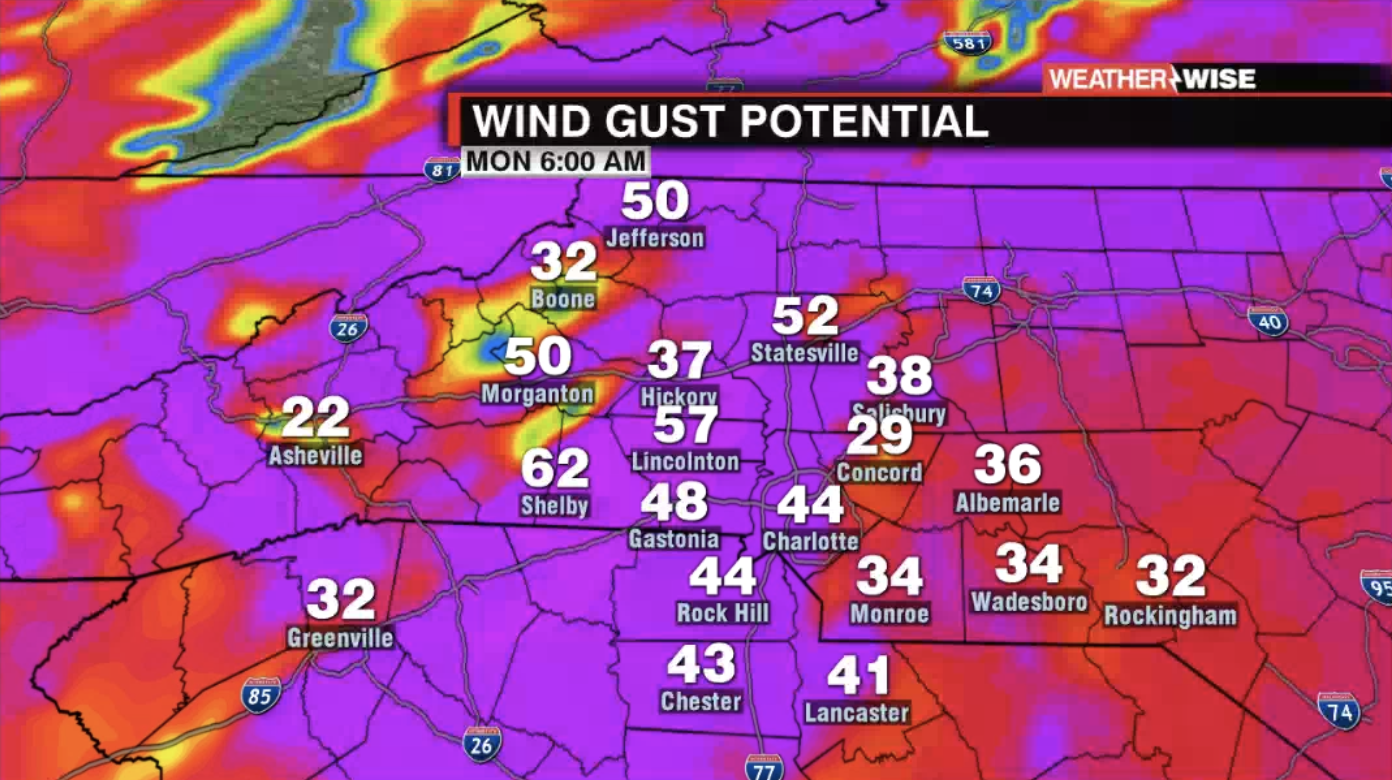 The tornado threat will also be significant with this system, particularly overnight Sunday into Monday. Increased instability and rotation in the atmosphere will likely produce a couple of supercells, mainly to the east of the Charlotte area. These rotating thunderstorms will have the capability to spawn tornadoes, some of which could be strong and long-lived. It should be noted, however, that the majority of spin-ups will be weak and short-lived along the squall line early Monday morning. That being said, the tornado risk is certainly there and should not be taken lightly.

With intense rain and wind, you can count on widespread power outages across the western Carolinas Sunday night. Torrential rainfall will likely soften and weaken the footing of power poles and trees, exposing them to the strong winds expected. Flash flooding will also be a major problem in the High Country. Localized flooding may also occur in low-lying areas or spots with poor drainage. Damaging straight-line winds near hurricane force could come into play as well, exacerbating power outages and turning any debris into projectiles that could damage life and property. Be sure to bring any standalone items, such as chairs, tables, and lawn equipment indoors as soon as possible. As mentioned before, the tornado threat looms for our Monday morning as well.

The system moving in will likely be just as bad, if not worse, than the one that brought multiple tornadoes to the Charlotte metro back in February. While there is a high bust potential for tornadoes, due to a relatively shallow, but intense, layer of instability, the flash flooding and straight-line wind threat will be nothing to spit at. Get prepared while you can and stay WeatherWise by tuning into WCCB Charlotte at 6 & 10 this Saturday and Sunday and download our COIT WeatherWise app HERE. 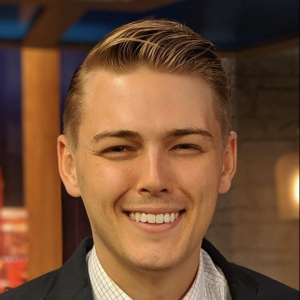 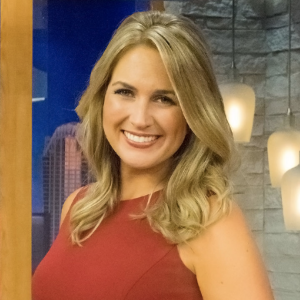 Hot in Hollywood: Tom Bergeron Out as Host of 'DWTS" and Mythbusters Star Dies