SC Senate Spends $1.2B In COVID-19 Relief With Little Debate

Senators voted 43-0 on a bill that nearly mirrors Gov. Henry McMaster’s suggestions on how to spend the money by reimbursing a trust fund to pay unemployment benefits. It calls for paying for an extra week of school for many students and creating a state stockpile of protective equipment for a future pandemic.

The Senate met as COVID-19 cases in South Carolina continued to surge. Officials reported 890 new cases Tuesday. It was the first time in seven days that South Carolina didn’t have more than 900 cases. But before a week ago, the state had never reported that many cases. 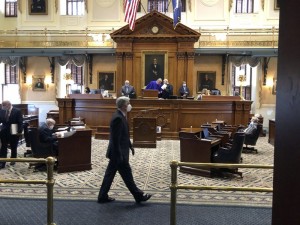 The number of people in the hospital from COVID-19 hit a new record Tuesday at 824 patients and the rate of positive tests went above 17% for the first time, according to data from the state Department of Health and Environmental Control.

Health officials reported 14 additional deaths, bringing the death toll for the virus to 673 since the outbreak began more than two months ago.

The Senate’s brief June special session had one goal — approve the federal aid money. And the typically long-winded chamber debated less than 90 minutes before sending the spending plan to the House, which meets Wednesday.

The bulk of the money, $500 million, goes to refilling the state’s unemployment trust fund. It was rapidly being drained by hundreds of thousands of lost jobs from the COVID-19 shutdown.

The plan sets aside $225 million for five additional school days to help students who missed around 10 weeks of in-class instruction last year. Officials asked that the money be concentrated on elementary schools, although many details like when those extra days would be added to school calendars have not yet been determined and may be left to local districts.

The bill sets aside more than $200 million to help colleges and local governments with COVID-19 expenses such as protective equipment and overtime.

It also gives emergency officials $17 million to create a state stockpile of protective equipment that health officials promise will be rotated and replenished unlike the unusable equipment sent by the federal government to some states when the pandemic started.

The Senate agreed to set aside about $600 million for unforeseen expenses. The money must be spent by the end of the year.

Also Tuesday, Gov. Henry McMaster announced a program where restaurants that voluntarily follow the advice from state and federal health officials to stop the spread of COVID-19 can get a special seal to put up outside their building.

To take part in the Palmetto Priority program, employees have to take online training and have a limited inspection by DHEC before obtaining the seal.

Customers who see a restaurant with the seal breaking safety rules can also report the violation. Too many confirmed violations and the business loses the seal, McMaster said.

McMaster, who has been consistently hesitant to issue a statewide order that everyone wears masks because the diffiulty in enforcing the rule said this type of voluntary approach is much better to stop COVID-19.

“This is a better deal to achieve the same goal,” the governor said. “It ties up no law enforcement resources.”