The ‘Gritty’ Details of the Saharan Dust Plume

You may have noticed an increase of people on social media sharing images, or videos of a ‘dust storm’ in the Caribbean over the past few days like the one below:

When you think of a dust cloud, you might be picturing a giant wall of dust and sand, like the one you may have seen in Mad Max or The Mummy – doesn’t it seem like there is always one of those for any movie set in the desert? Sandstorms or haboobs are caused by intense wind storms over very dry areas that force dust and sand up to 5,000 feet into the air, resulting in that daunting wall of dust you might be thinking about. This dust cloud is different.

It is an accumulation of sediments, with a base that is more than a mile up in the atmosphere, blocking the sun’s rays and giving that hazy look in photos coming out of the Caribbean. These dust clouds are not an unusual occurrence either. From mid-June through late August, these dusty layers are carried high up in the atmosphere along with the African easterly jet across the Atlantic every 3-5 days, depositing iron-rich nutrients in the Caribbean and reinforcing the sandy coastlines.

What is unusual about this layer of dust is the size and density of the plume – by far the most extreme from the age of Modis satellite collection data. This plume is helping to temporarily stabilize the atmosphere and choke any tropical development, but it is also reducing air quality and causing issues for those with asthma and other sensitive breathing groups

The ongoing Saharan #dust outbreak across the tropical Atlantic is *by far* the most extreme of the MODIS satellite record — our most detailed, continuous record of global dust back to 2002. Daily MDR AOD of 1.66 shatters previous daily record of 1.13 set July 31, 2013. #SAL pic.twitter.com/yv2VW9LUYO

The dust is already beginning to reach the Gulf States. It will spread further into the south through the end of the week. And it will reach us here in the Carolinas by Saturday. The dust layer won’t be as thick when it reaches Charlotte, but sensitive groups should prepare to possibly keep it indoors this weekend. For all you amateur photographers out there, be on the lookout for a more vivid sunset Saturday and Sunday nights and a nice sunrise Sunday morning. The haze will clear late Sunday into Monday. 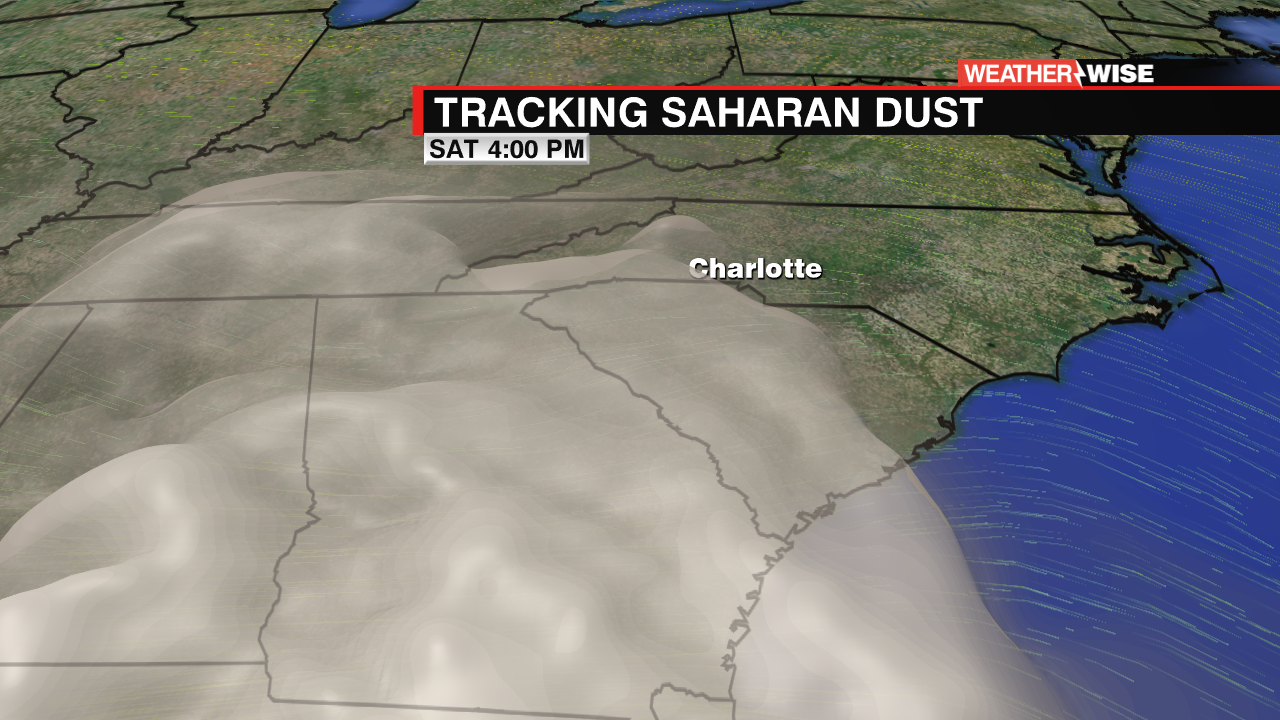