It's hard to attribute any singular natural disaster to climate change, but extreme weather has become more common since the turn of the millennium. 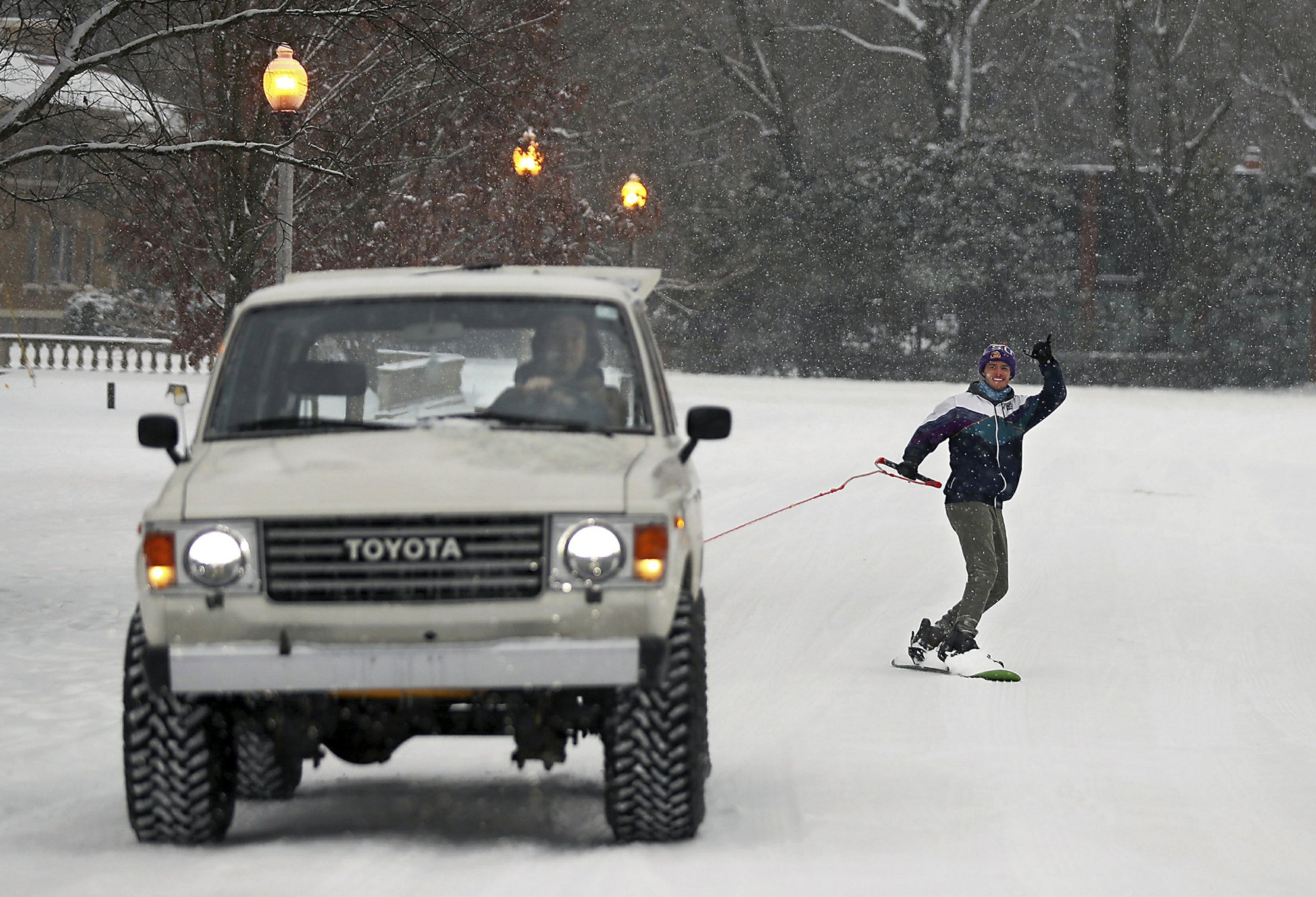 CHARLOTTE, N.C. — It’s no secret that the Carolinas have been stuck in a miserable pattern this winter. Constant rain and clouds have made highs above 60° a rare sight since the New Year; in fact, 2021 is still on track to become the first in the past 10 years to fail to reach 70° through February. That said, our troubles seem quite small compared to what our friends in the central portions of the country have been dealing with. All-time lows have been falling left and right in states such as Texas, Oklahoma, Arkansas, and Nebraska.

Extreme Cold in Central US

Low temperatures this past Tuesday, February 16, 2021 with comparison to all-time records.

One of the most severe and sustained cold snaps in US history is still ongoing in portions of the Southern Plains, where some spots haven’t risen above freezing in over five days. Millions have gone without power for the better part of the past week, as Texas’ electric grid has been strained to keep up with high demand. Unfortunately, nearly 50 people have died in the Lone Star State alone, thanks to the extreme weather.

How Did This Happen?

Did Climate Change Cause This?

Before we get too in-depth here, we should establish what “weather” is compared to climate. In short, the weather is what is happening at this moment. Climate, on the other hand, is the long-term pattern. For example, today’s high is weather. The average high temperature over the past 30 years is climate. Whether you believe that climate change is man-made or not, it is hard to refute that our planet is warming at a rate never seen before in its 4.5-billion-year history. Since this is “climate” change and not “weather” change, it’s hard to attribute any singular natural disaster to our changing climate. That said, extreme weather events have been more commonplace since the turn of the millennium.

So, it begs the question: has this extreme cold been at least influenced in part by climate change? The answer may be a bit counter-intuitive. It’s been well-documented that the Arctic ice caps have been shrinking; in fact, the polar regions of our planet have been most affected by climate change. With warmer temperatures intruding farther and farther north over the summer, the Arctic loses ice at a rate of roughly 1.2 trillion tons per year since 2010, according to new research from the American Association for the Advancement of Science (AAAS). This loss of ice creates a positive feedback loop that is anything but positive for the environment. As you may know already, white and other lighter colors tend to reflect light back into space, while darker colors absorb light. When the white ice melts, it’s replaced by a darker ocean, leading to more light being absorbed, which in turn leads to more warmth. This loop accelerates further melting of the ice caps, which can be hard to turn back. 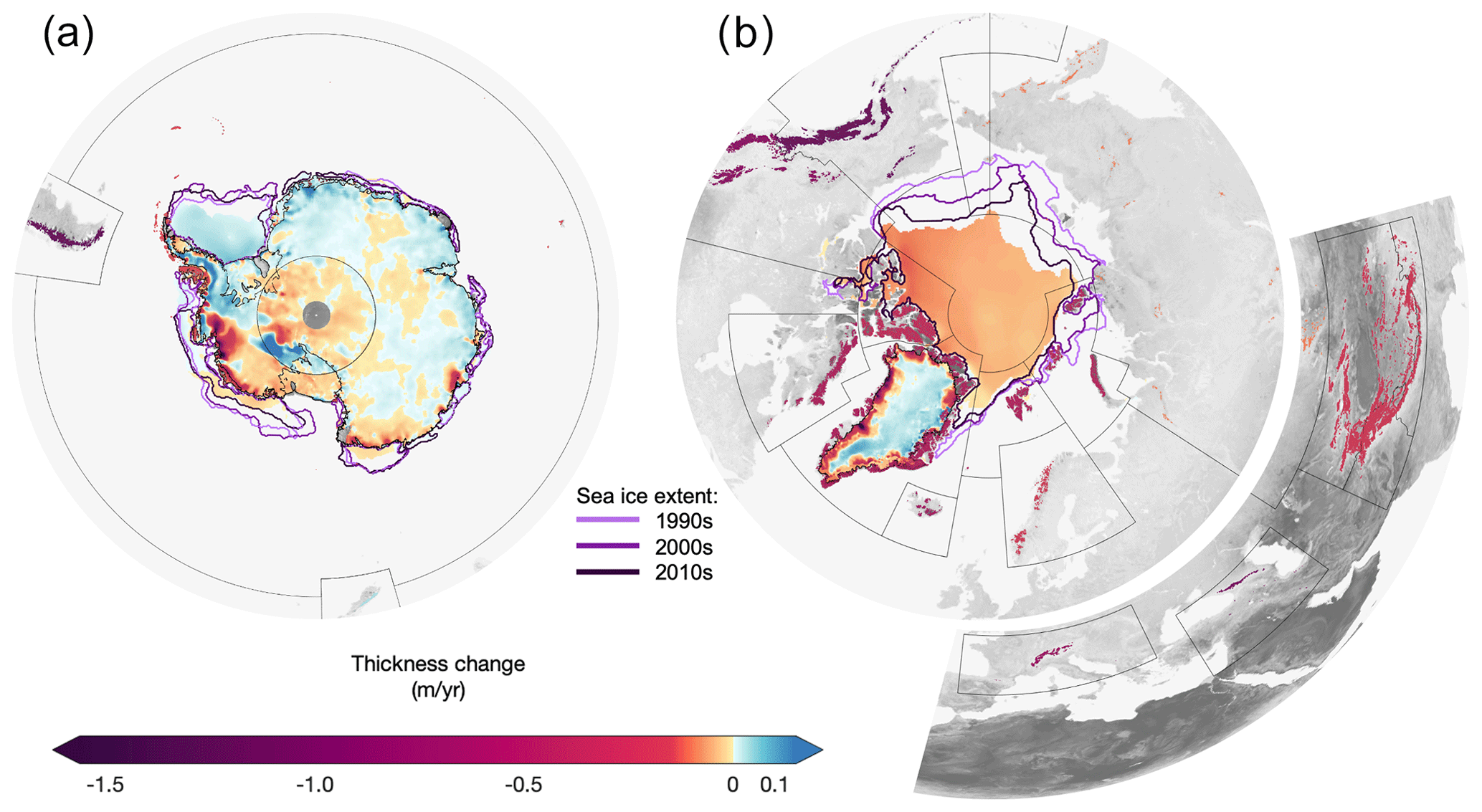 Average rate of ice thickness change in the (a) Southern Hemisphere and (b) Northern Hemisphere. Changes in Antarctic (1992–2017) and Greenland ice sheet (1992–2018) thickness were estimated using repeat satellite altimetry following the methods of Shepherd et al. (2019). Sea ice thickness trends between 1990 and 2019 are determined from numerical sea ice and ocean modelling (Zhang and Rothrock, 2003), as well as the average minimum of sea ice extent in February (Antarctic) and September (Arctic) (purple lines) for each decade during the same period.
via AAAS

This leads us to why the jet stream is weakening with each summer that passes. A warmer Arctic means that there is a weaker gradient between the typically cold polar regions and the warmer mid-latitudes. A weaker gradient means that the jet stream will be weaker, as well, which allows more frigid air to spill in from the north. Granted, the Arctic is warmer than it has been in years past, but it’s still cold enough to provide brutally icy air to areas that normally don’t see freezing temperatures often.

At first glance, it seems contradictory that a warmer Arctic leads to more frigid air spilling farther south. But when we learn about what exactly the jet stream is, what it does, and how it keeps Arctic air locked up north, it makes more sense. As mentioned before, it’s nearly impossible to look at the data and point to individual natural disasters as directly caused by climate change. When we look at the long-term trends, however, it appears that the warmer the planet gets, civilization becomes more exposed to extreme weather, hot or cold.