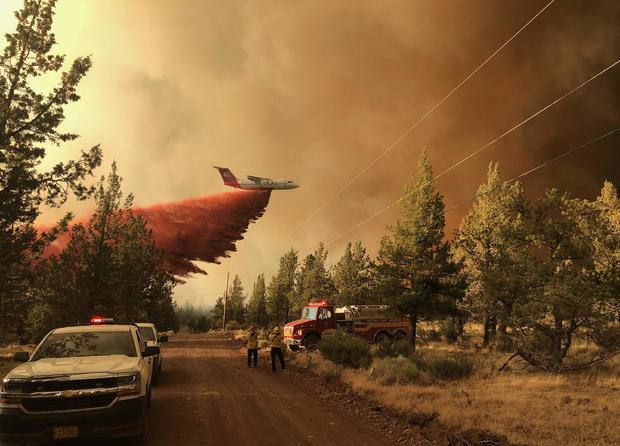 A firefighting tanker drops retardant over the Grandview Fire near Sisters, Oregon, on July 11, 2021.

KLAMATH FALLS, OR — Unrelenting dry heat continues to scorch the Pacific Northwest, as record-breaking fires run wild across the region. Over one million acres, or 1,500 square miles, have burned this year alone west of the Rockies. For reference, that’s an area the size of Gaston, Mecklenburg, and Union counties combined. The fact that the US is currently seeing its worst start to the fire season in over a decade is even more concerning.

As of Wednesday, there are currently 15 uncontained large 🔥 fires in the PNW. Seven large fires in OR and eight in WA for a total of 332,107 active acres.

The Pacific Northwest Region of the National Forest Service is currently monitoring 15 “large fires” – wildfires that burn over 100 acres – as of Wednesday evening. The Bootleg Fire in southern Oregon has already scorched over 200,000 acres alone. This fire, which is also the largest in the nation, continues to rapidly spread and is 0% contained. Officials are still working to confirm what sparked the Bootleg Fire. It should be noted that dry thunderstorms, which often spawn lightning with minimal rainfall, have sparked multiple brush fires nearby.

The Bootleg Fire, which began more than a week ago and remains zero percent contained, has set off a wave of evacuations and prompted more than 130 engines to respond, according to fire officials. https://t.co/4HfKWCcFxN

While many in the area are used to the dangers that come with wildfire season, some spots can’t help but feel they’ve already had more than their fair share. The small town of Doyle, California, is one such location. Nestled some 40 miles northwest of Reno, the 700-resident-strong community is already weary from having to evacuate due to a fire just eight months ago. A wind-driven inferno tore through the area this past November, torching 21 homes and 19 other structures. Doyle was also hit this past Saturday by the Beckwourth Complex Fire, which has burned nearly 100,000 acres and is only 66% contained. This case of déjà vu is even worse, as 33 homes have been reduced to ash and rubble.

Hazardous weather conditions are showing no signs of stopping this year, as yet another heatwave sets up shop over the western half of the United States. Red flag warnings are in effect for counties in California, Oregon, Washington, Idaho, and Montana. Temperatures are expected to remain 5-10° above average for much of the region, with little in terms of rainy relief in sight. Nearly 100% of the land area east of the Rocky Mountains is under at least abnormally dry conditions; over half of the region is experiencing extreme drought.

While no civilian deaths have been directly attributed to the fire season so far, tragic news is coming out of Arizona. Two firefighters were killed when their reconnaissance plane crashed over Wikieup, located in the western half of the Grand Canyon State. 47 people died in 2020’s fire season.

Fortunately, wildfires are not a problem in the Carolinas. Near-average heat, high humidity levels, and pop-up wet thunderstorms have kept our fire season in check so far. That said, we’ll have to stay wary heading into the fall when fire season reaches its peak in the High Country.